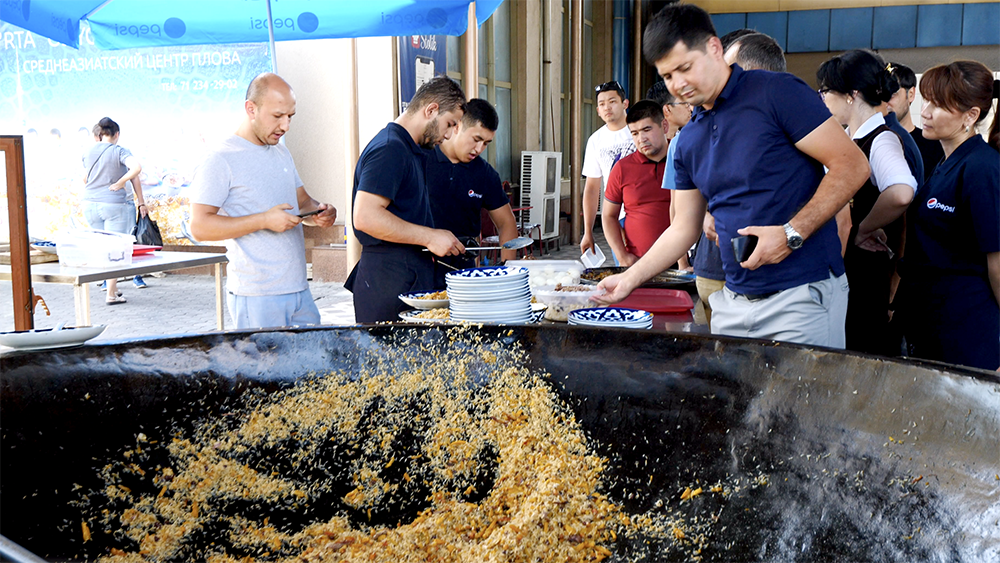 My adventure began at the Plov Center, the best place in Uzbekistan to eat plov! 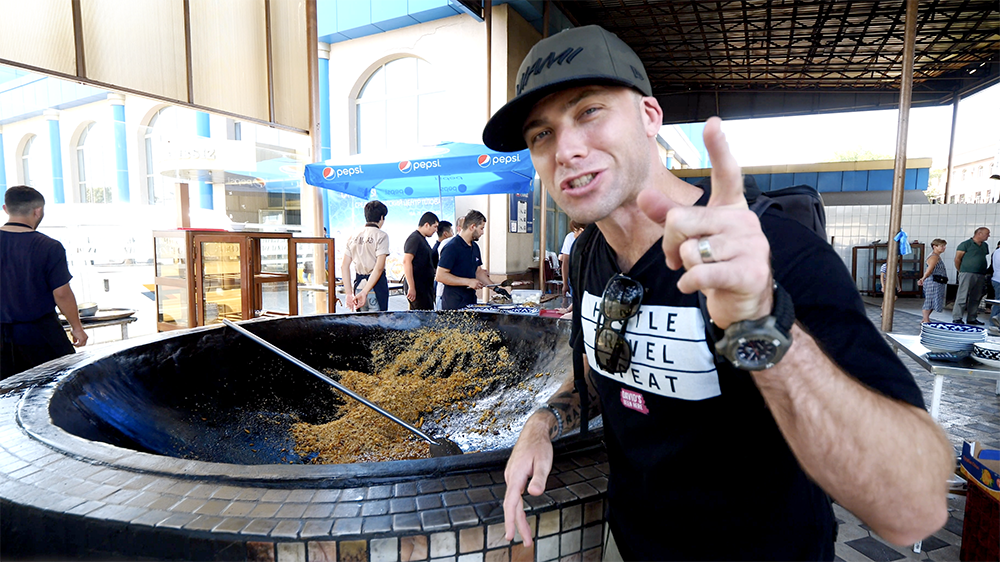 Inside, I saw a massive pan of plov. It was probably the biggest pan I’ve ever seen! I could see why it’s the king of Uzbekistan street food. There were seven different vendors selling plov. You can order from a vendor outside or from a waitress inside. The waitress takes longer, so I decided to order from the vendor. My order came to 25,000 som, or $3 USD exactly!

I loved seeing the vendors mix the oil into the rice and watching them plate it. It’s a meal and an attraction! It was a real experience, watching them make and plate the food. I loved it! 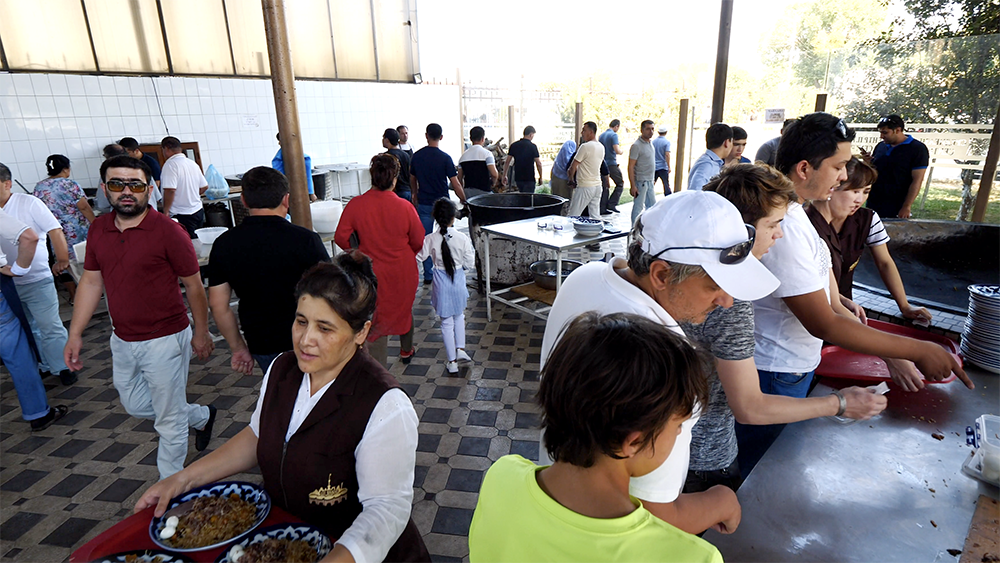 Inside, there’s also self-serve bread, salads, and fresh fruit juices. Because it’s self-serve, you can grab some right there, or you can order it from a waitress if you choose to do so. We decided to grab it now and eat it upstairs so I’d have a view. 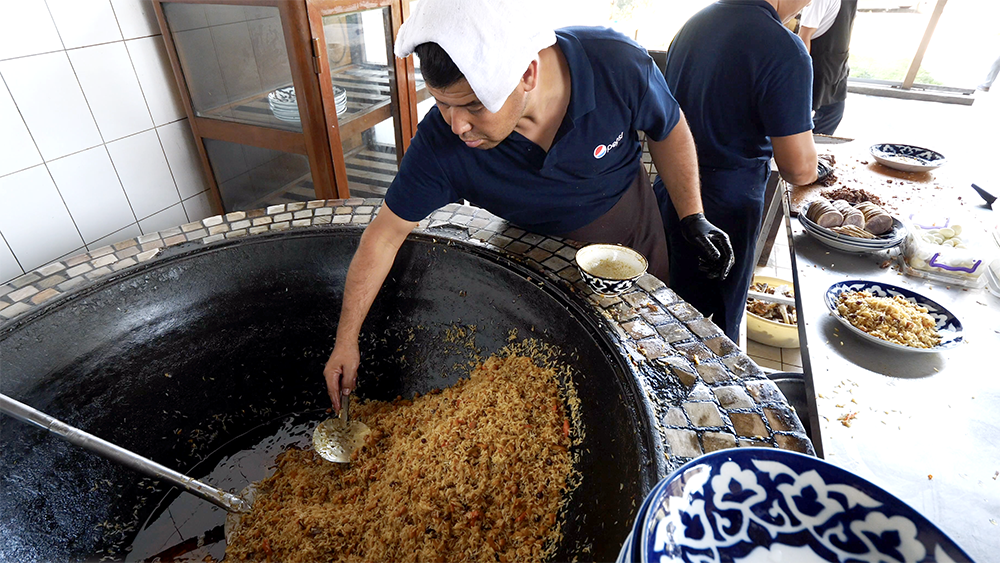 My plov was a mix of lamb and beef, chickpeas, raisins, quail eggs, white and yellow rice, and horse sausage. My first salad contained tomatoes, cucumbers, and onions, similar to a Greek salad. The other had pickles and cabbage. 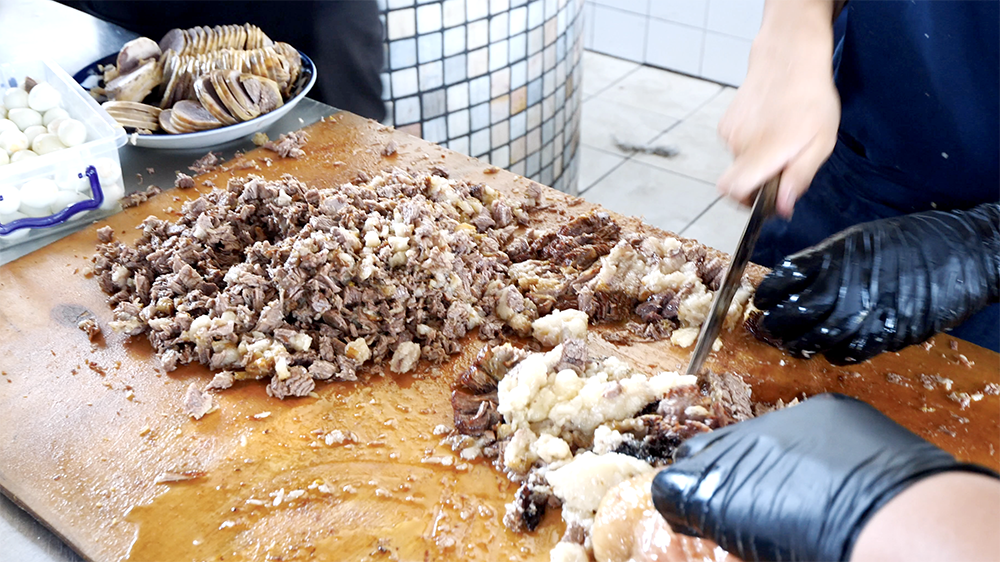 The plov was a little sweet because of the yellow carrots and raisins. It reminded me of a dish I’d had in South America. It was one of the tastiest rice dishes I’ve ever had. I loved the oil throughout, the vegetables, and the different meats. It created a nice contrast of flavors that was so different from Indian biryani! It’s definitely the king of Uzbekistan street food! 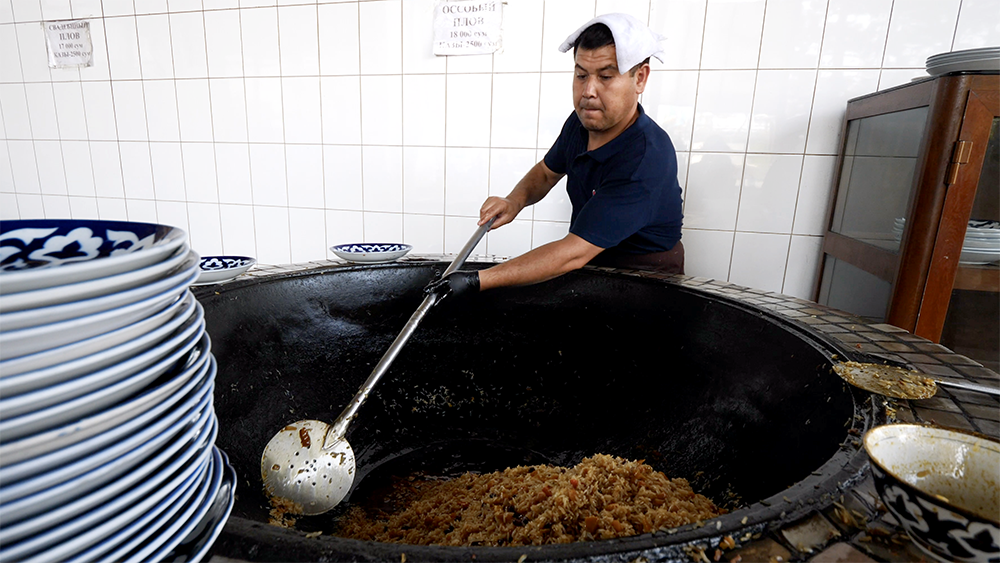 The horse sausage was very gamy, salty, lean, and tender. Together with the plov, it was an insane combination. It was like the different meats all married each other! The juice, meanwhile, was both minty and fruity.

Check out the 10 Places You Must Visit in Serbia

The quail egg with the plov was very different, but the plov was a masterpiece! Next, I took some of the cucumber and cabbage from the salad and mixed it into the plov. The cucumber was pickled and was fresh and crunchy. I loved the contrast between it and the oily rice! 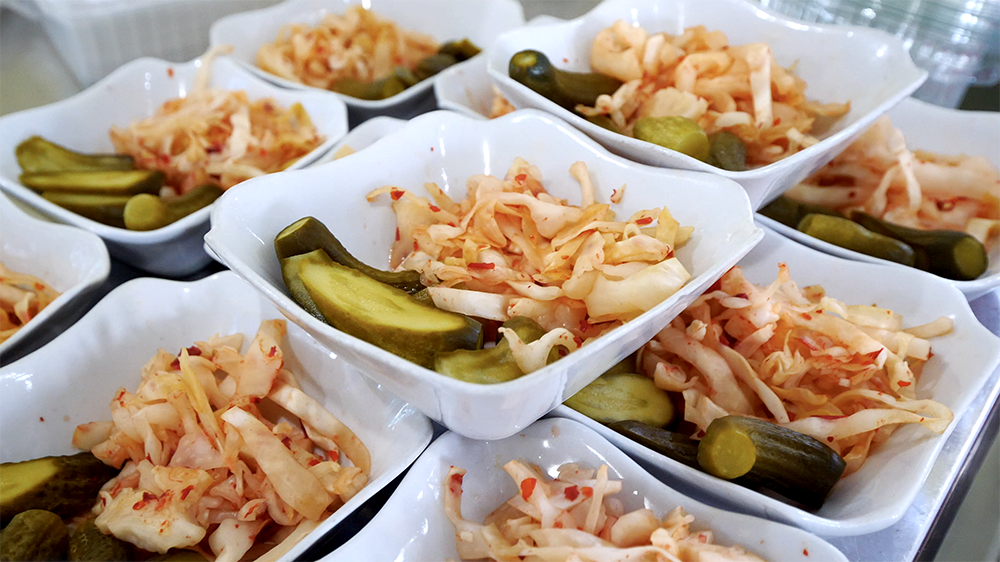 Then I mixed the tomato salad into the plov. It was super sweet, juicy, and fresh. Everything was so fresh and tasty! 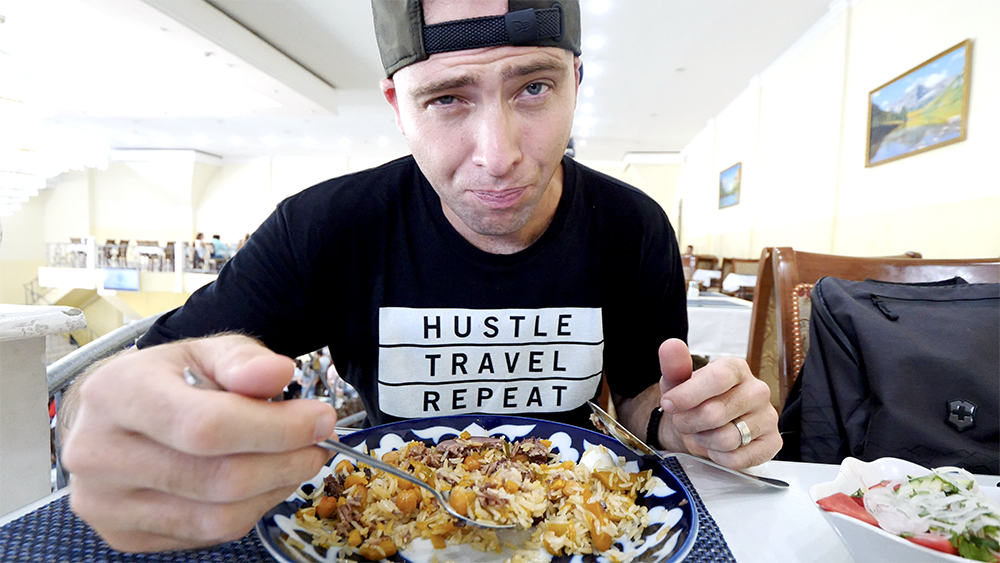 Our next stop was the Oloy Bozori, which is another market in the city. The bazaar was in a beautiful, modern building with 30-40 foot ceilings. I could see fruits, nuts, and spices. It felt cleaner than Chorsu Bazaar and was very nice and modern! It had been renovated within the last few years, and it showed. 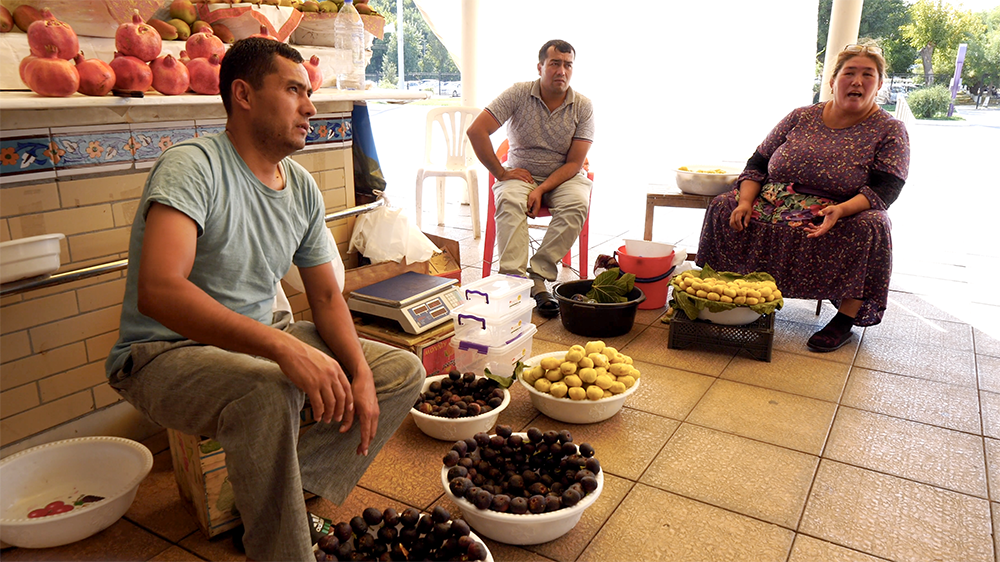 Vendors offered me some tasty figs and strawberries. The strawberries were out of season, so they were small, but good. They only sell the highest-quality foods here. 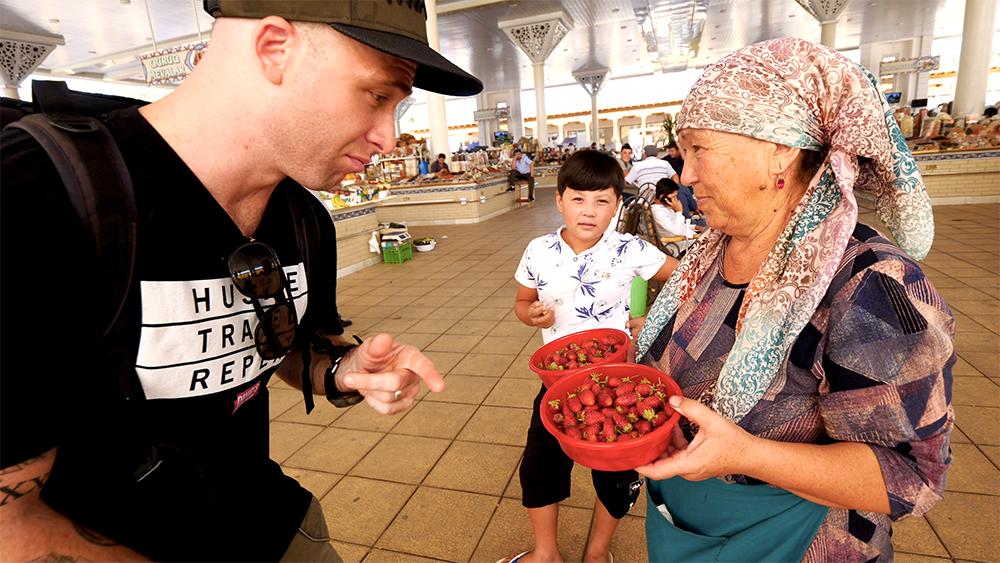 Everyone wanted me to try their food! I had some fruit and some medicinal-tasting green tea. It gave me instant energy! Next, we saw some organic Uzbek tomatoes. I was given some hot Samarkand mountain tea, which was light and herbal!

Check out the Things to Do in the Dead Sea, Jordan

The aroma around the herbs was so good! I tried a strong Uzbek milk ball. It smelled like strong, fresh, unpasteurized cheese! It was like I was drinking it straight from the cow! 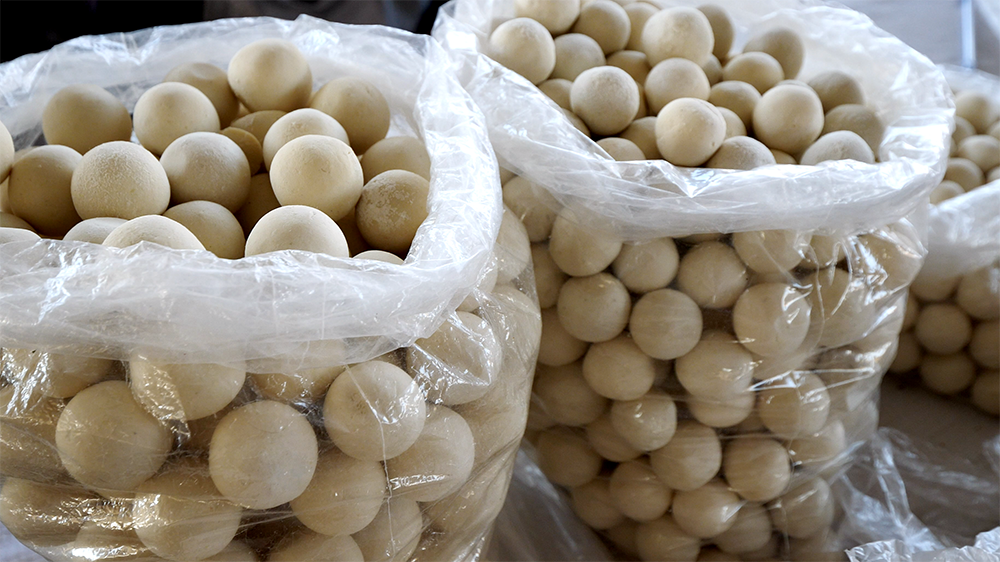 Then, we headed to Independence Square, which is in the center of Tashkent. It represents the independence of Uzbekistan. We could see the President’s house nearby. We had to pass through a metro station to get there. I had heard that the metro stations in Tashkent were unreal, but I didn’t get to see it just yet. On the other side of the metro station were two fountains and an aqueduct-like monument. There’s another monument that honors all the Uzbeks who died in World War II. There’s also an eternal flame. 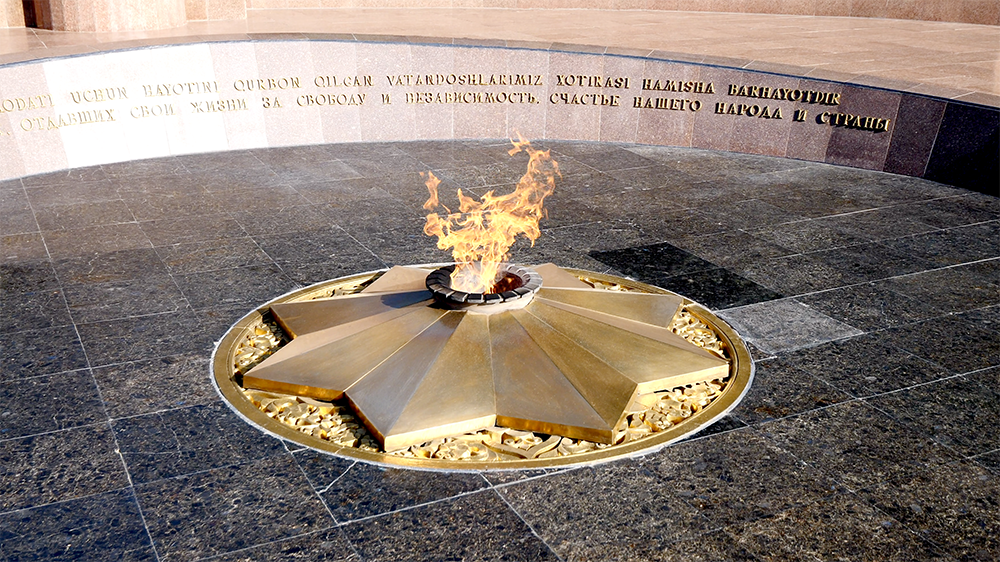 My grandparents were directly affected by World War II. I wouldn’t be here if they hadn’t met during it. This war affected everyone in the world in some way. It’s always a good idea to visit war memorials and remember the people who fought for us to be free. 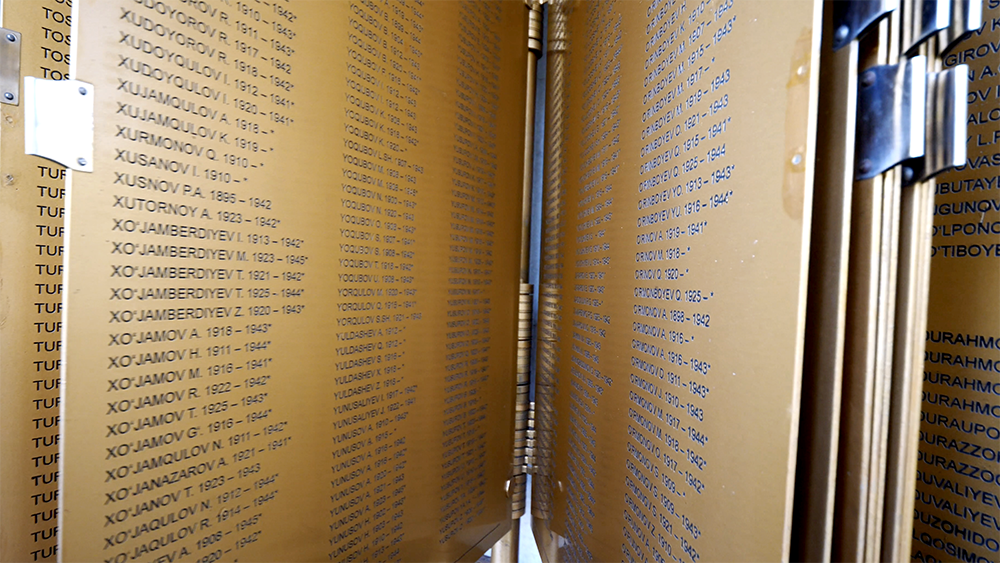 After we left the memorial, we passed by the fountain again while the water was shooting straight up. It felt much cooler there!

Check out the Top Things to See and Do in Doha, Qatar

We went back through the metro station and paid 1,400 som each, or about $1.50 USD per person to enter. It was the fanciest metro station I’d ever seen. It was beautiful and clean and had lots of marble pillars and chandeliers. It was built by the Soviets. All the stations in Tashkent are incredible! Unfortunately, I didn’t have time to ride the metro to see more stations because I had a packed schedule, but I highly suggest visiting a few stations when you come to Tashkent! 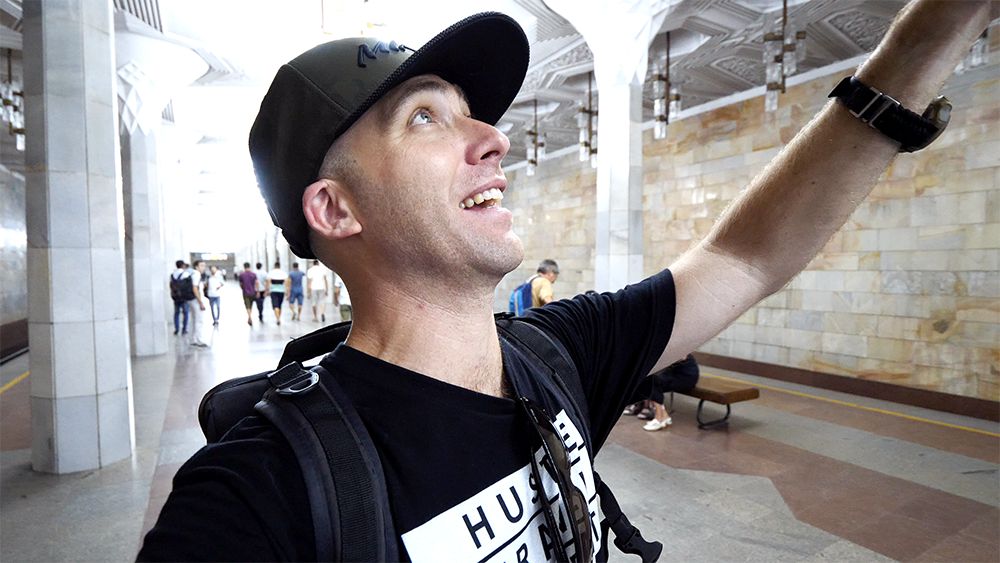 I hope you enjoyed exploring Tashkent with me and coming with me to try the king of Uzbekistan street food! If you did, please give the video a thumbs up and leave a comment below. Also, please subscribe to my YouTube channel so you don’t miss any of my upcoming travel/food adventures!