After a five-hour taxi ride from Shahrisabz, I had finally arrived in the town of Termez! This small but important city near the Uzbek/Afghan border is brimming with magnificent historical and archaeological sites, and I could not wait to explore them. Come along with me as I dive into Uzbekistan food heaven near the Afghan border and explore the historical sites in Termez! 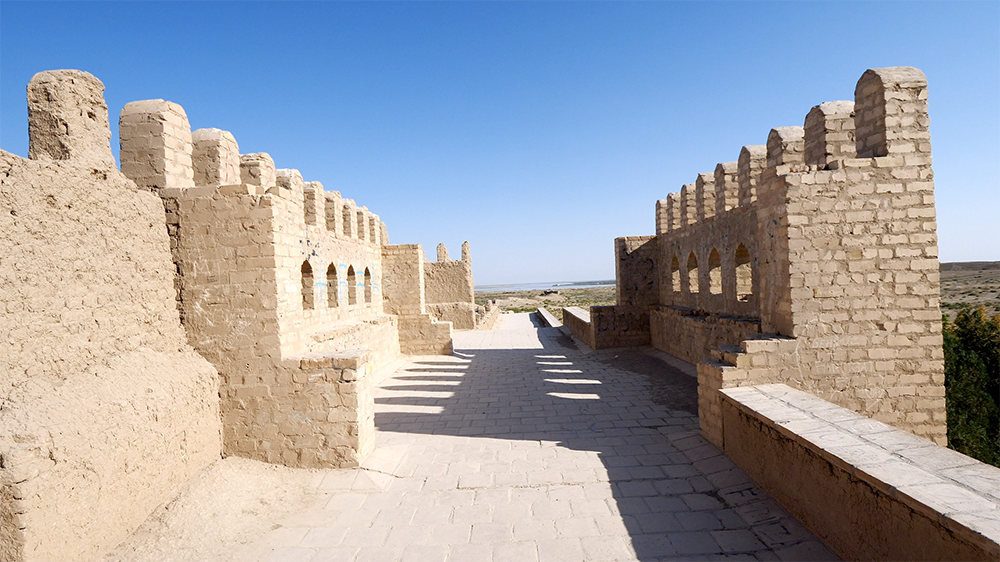 Termez is the southernmost city in Uzbekistan and is also its hottest city. That wasn’t going to stop me from exploring, though! 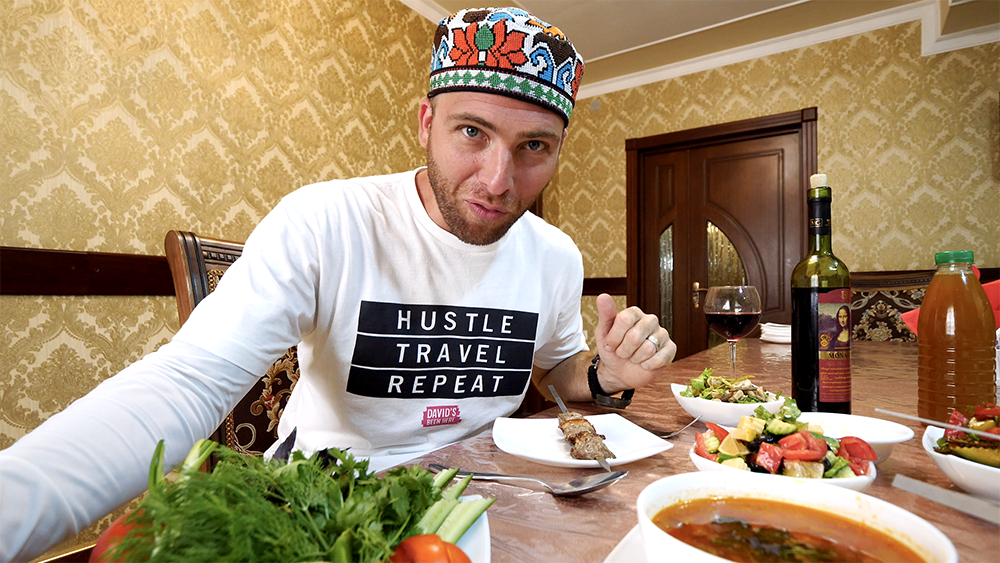 I started off at Rich Restaurant, where I was going to try some delicious Uzbek food! I teamed up with my guide for the day, Otabek. The restaurant had a huge dining hall, but we had our own, private dining hall. Our feast included lamb kebabs, soup, five salads, bread, and wine. The wine was really fruity, like cherries! 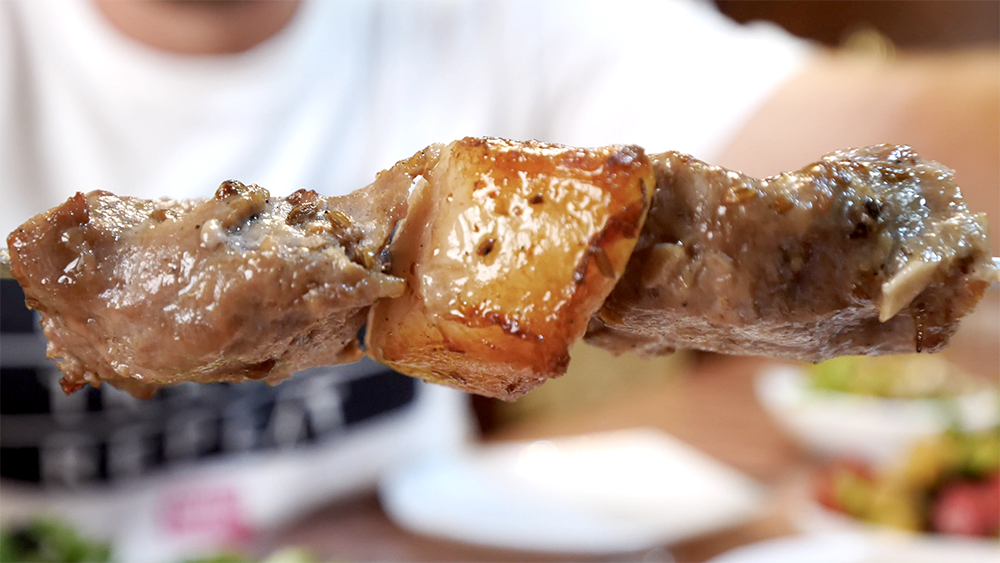 I started with the lamb kebab, which was juicy and tender with a nice charcoal crust. It also had some fat, which was tasty and gelatinous. They had the right amount of salt on them. The kebabs in Uzbekistan are king!

Next was mastava, which is a traditional soup. It contains vegetables, beef, and rice. I loved the carrots and potatoes in it. The broth was also really nice, and there were some amazing tomatoes as well. The contrast of textures was out of this world! It’s the kind of soup you’d have if you were sick. 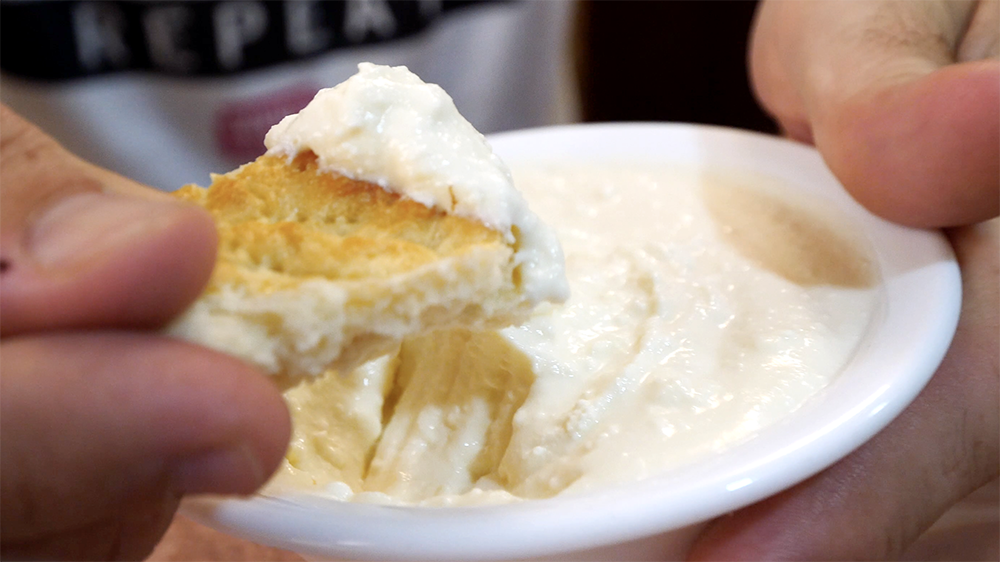 Then, I tried the sour cream with bread. It was more like sour yogurt or a thick, Indian buttermilk. The bread was dense rather than fluffy and airy, but was really nice. 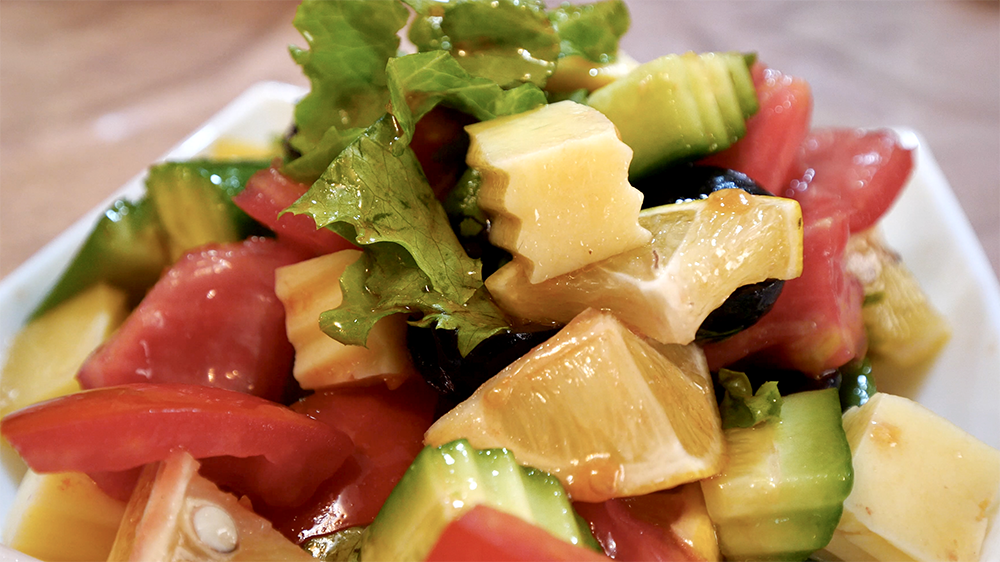 My first salad was nice and had fresh peas, cheese, cucumbers, olives, and tomatoes in it. The next was one you’ll find throughout the country and was similar to a Greek salad. The cheese in it was dense, almost like a manchego. Then, I tried the soy-sauce-based salad with tomatoes, cucumbers, and beef. It also had sesame seeds in it and was so tasty! 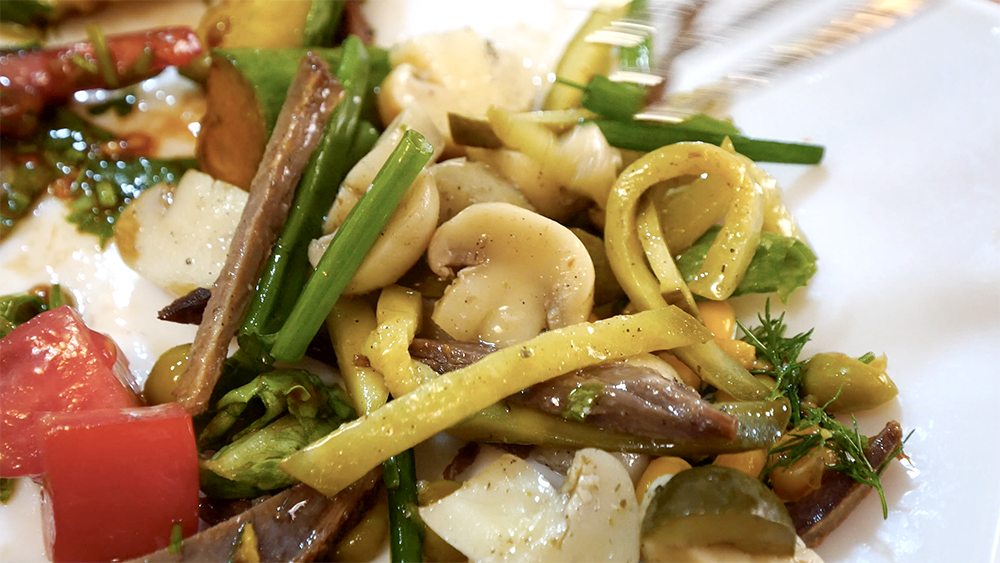 My favorite was the one with the wild mushrooms. They were super buttery and had a light dressing on them. It also contained green onions and beef! 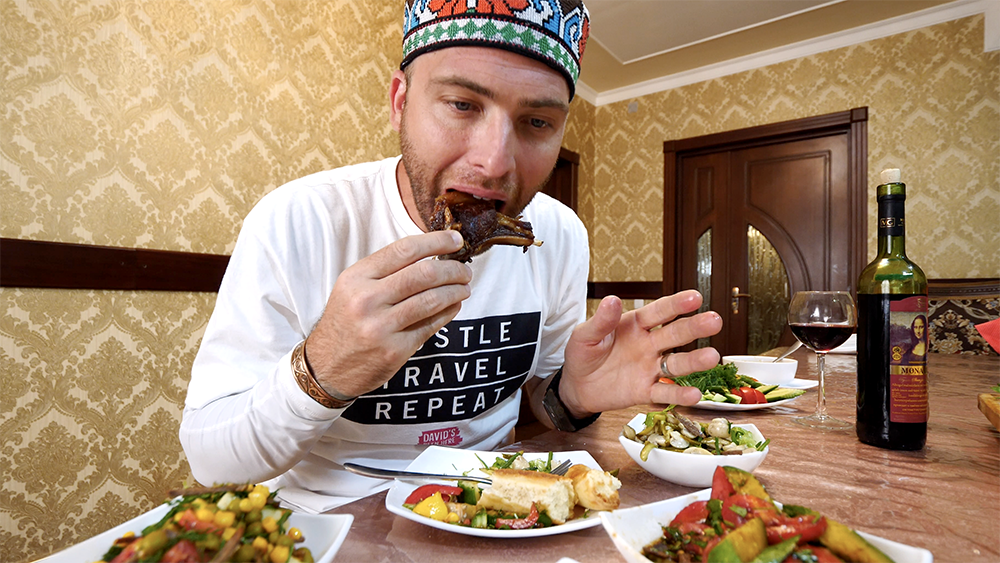 Next was fried, fatty lamb. It wasn’t too deep-fried. The lamb in Uzbekistan rivals the lamb in Greece! Then, I had some mountain tea. It’s so good! This Uzbekistan food was out of this world and now I couldn’t wait to check out the historical sites of Termez! 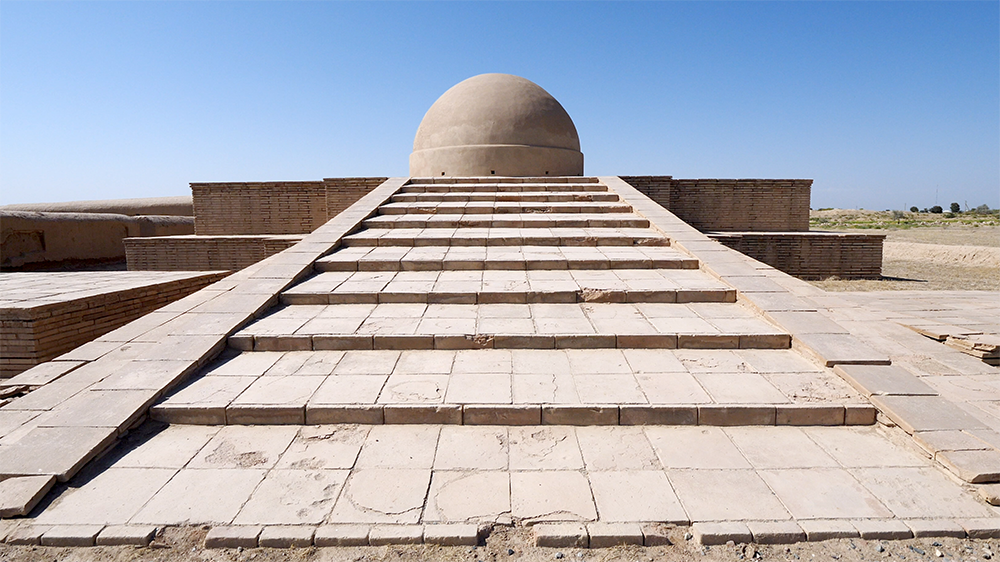 After my meal, we headed to an ancient Buddhist monastery called Fayaz-Tepe. It dates back to the 3rd century BC. It’s a UNESCO World Heritage Site. The watcher opened up the gate and let us inside the stupa. Inside is the original mud stupa. The outer one was built to protect it.

Also on the grounds are ruins of the dormitories and the kitchen. The dormitories had pillars lining a central courtyard. I could also see where the rooms were. The ruins were very weathered and showed signs of great age. Each room has holes in the walls for a Buddha statue to pray to. The ruins are much bigger than I thought! 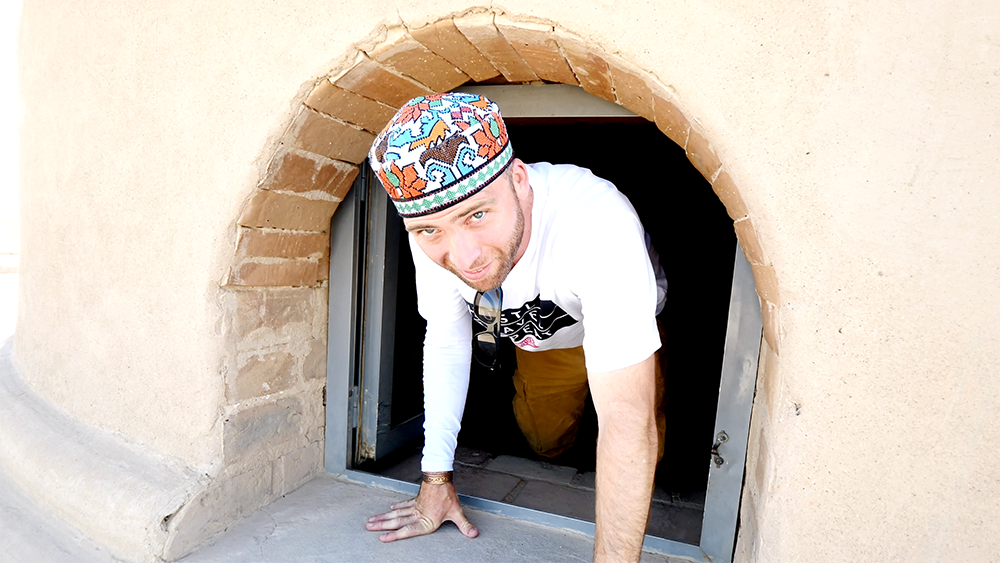 There’s also a sauna. They used to bring water using mud pipes from the river to use in the complex and the sauna. This site was discovered in 1968 by a shepherd and later unearthed by the Soviet government. Unfortunately, the site is deteriorating and I saw lots of spots where the walls were cracking and falling apart. It needs to be protected from the rain and heat by a tent. 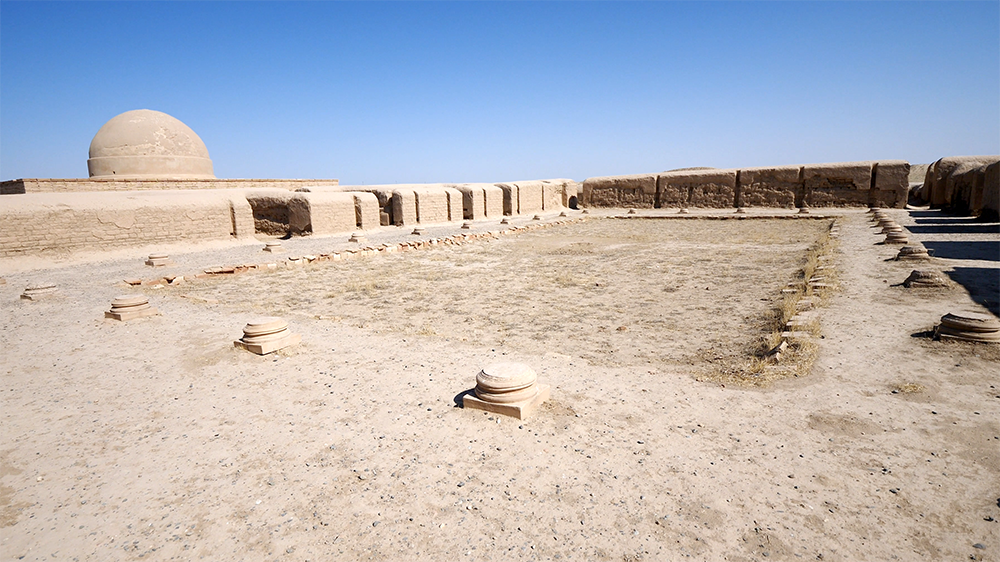 Next, we headed to Kara-Tepe, another Buddhist monastery. This site is partly covered by a tent to protect it. It’s similar to Fayaz-Tepe. It has really big rooms and high walls. Under the covered part is the stupa where they’d pray to Buddha. There’s also a terrace, but I couldn’t see any pillars. 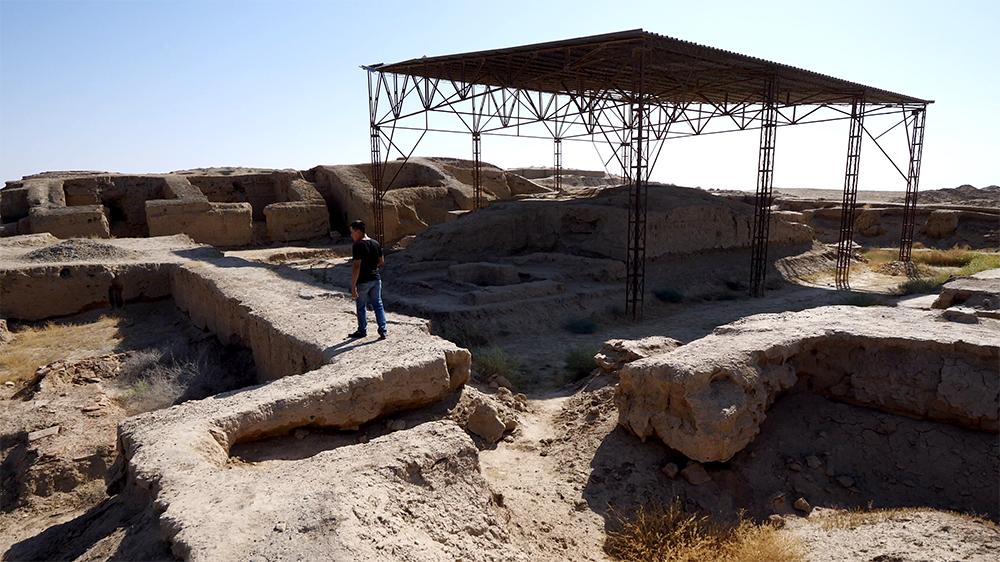 The walls crumble at the slightest touch. I got to explore lots of hallways and rooms. The rooms are all divided by the corridor, and the terrace is in the middle. I could also see the river and Afghanistan from there! We were also the only ones there. 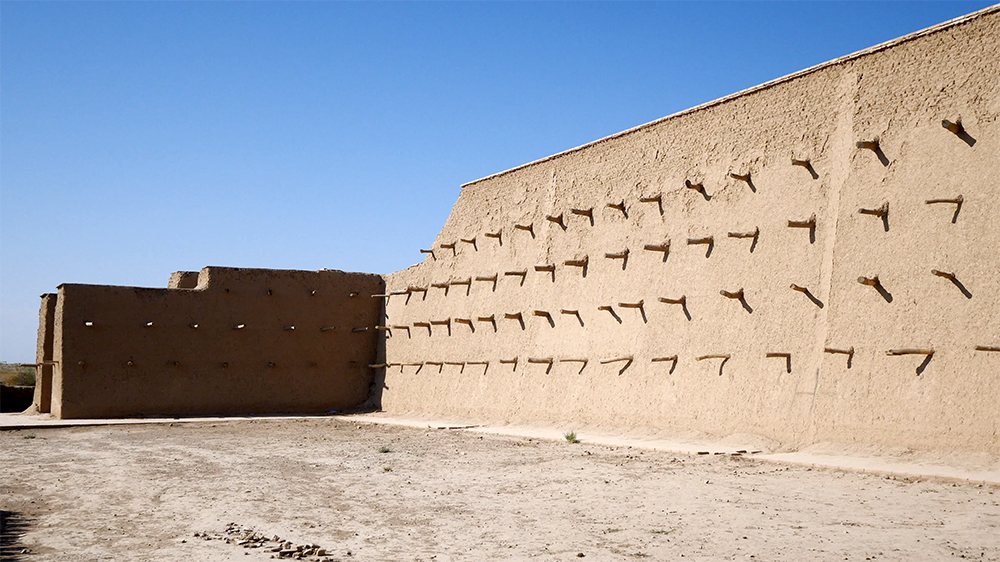 We drove for 2 minutes and passed through a Silk Road gate where they would cross over from Afghanistan. The walls had to have been restored. It reminded me of fortifications I had seen in Europe. I climbed to the top of the wall. It’s used as a customs gate now. Unfortunately, some people had vandalized it with graffiti. I could see the river, Afghanistan, and our next site, Al Hakim At-Termezi!

Check out 15 Things to See and Do in Samarkand, Uzbekistan

Al Hakim At-Termezi used to be a mosque, but now it’s just a monument surrounded by a beautiful garden. There were lots of trees, flowers, and flies and dragonflies. There are always lots of flies in the desert. The mausoleum of Al Hakim At-Termezi is also there. He was one of the most important figures in Islamic history, and was an author and scholar. 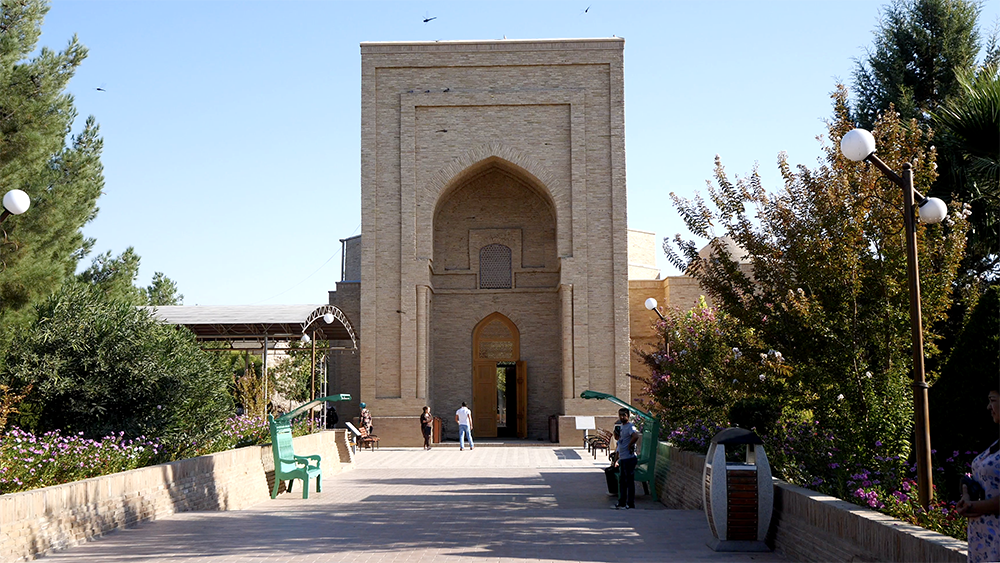 There are graves from the 17th-19th centuries outside the mausoleum. The mausoleum was built from the 10th-15th centuries. Inside, the walls are white marble and have intricate gold and blue designs and writing from the Koran on them. The tomb itself is quite big and is wider than others I had seen. 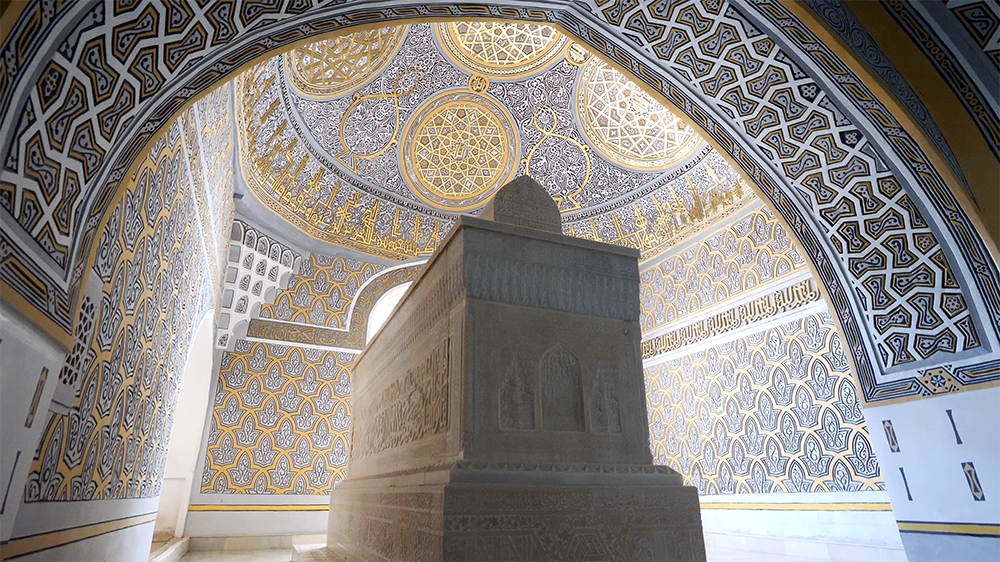 Outside the mausoleum is a cave system where people pray. It’s at least 20 or 30 degrees cooler there! 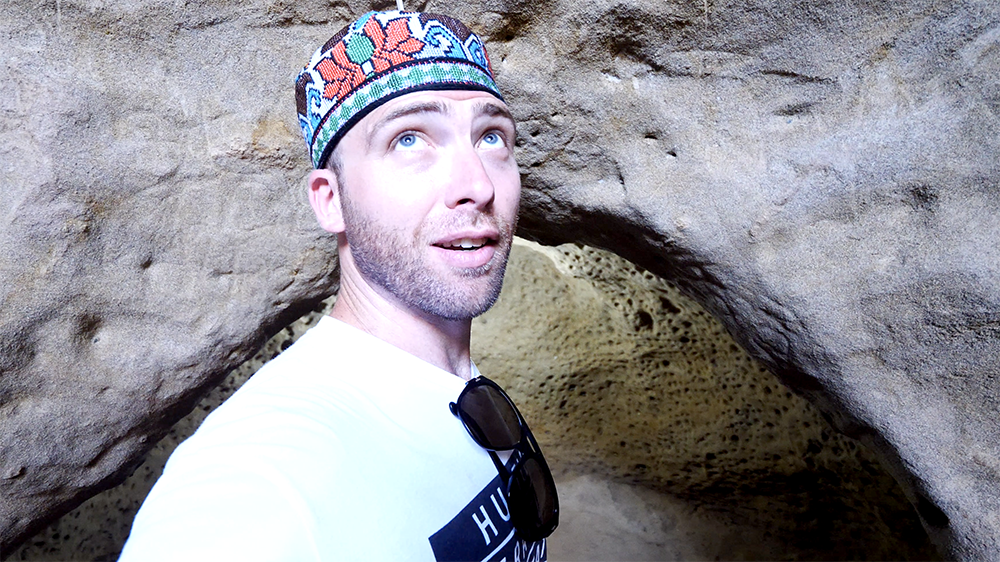 I hope you enjoyed experiencing Uzbekistan food heaven and going on a historical sites tour of Termez with me! If you did, please give this video a thumbs up and leave a comment. Also, please subscribe to my YouTube channel and click the notification bell so you don’t miss any of my upcoming travel/food adventures!