After meeting the President of Uzbekistan at the incredible Sharq Taronalari Music Festival the previous night, my adventures in Samarkand continued with a tour of the local ancient sites and some delicious, authentic Uzbekistan food. Come along with me as I explore Samarkand! 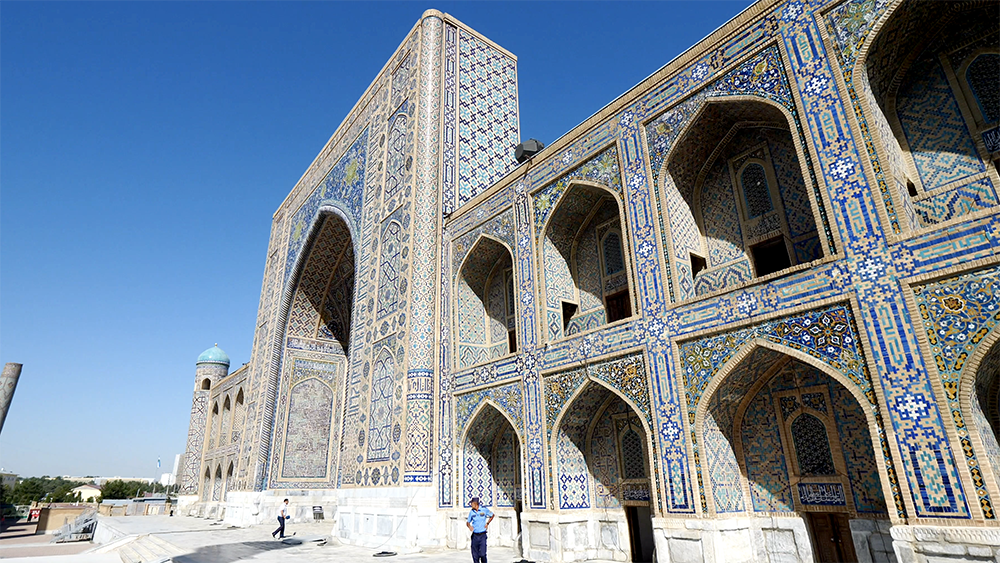 My day started at the Registan, a square that is bounded by three incredible madrasahs: the Ulugh Beg Madrasah, the Tilya-Kori Madrasah and Sher-Dor Madrasah. Samarkand was the most important city along the Silk Road in Central Asia. Alexander the Great arrived in Samarkand in 329 BC and seized the city, followed by Iranians and Turks. Then, in 1220, Genghis Khan conquered the city as well, followed by the Soviets in the 20th century, but Uzbekistan got its independence on August 31, 1991. 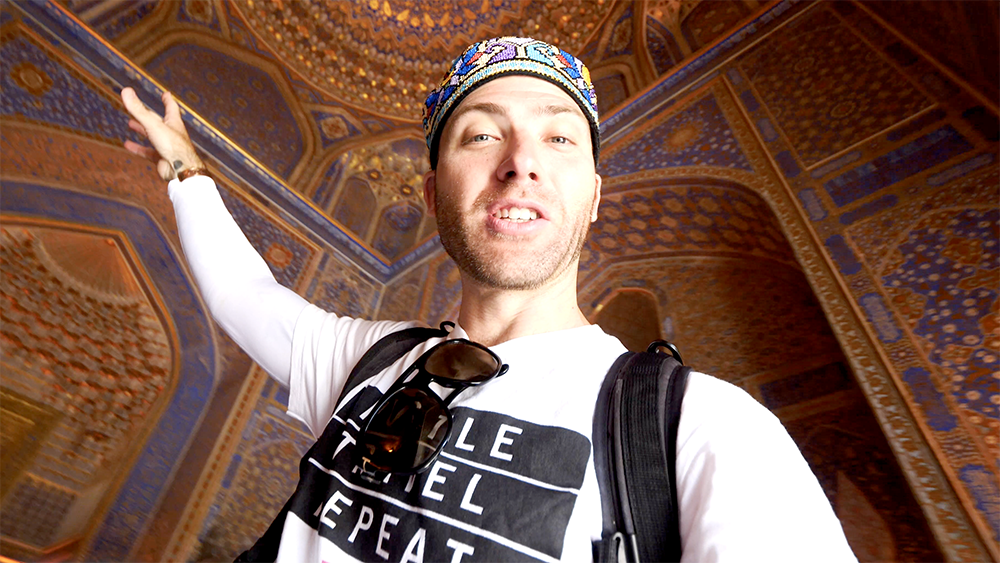 The Soviets built a new city in Samarkand, while the old city became a UNESCO World Heritage Site in 2001.

Check out the Top 10 Things to Do in Bukhara, Uzbekistan

Madrasahs are Islamic schools, and Registan is considered the heart of Samarkand. The buildings are beautiful examples of Islamic architecture. On the western side of the square is Tilya-Kori Madrasah, which contains a mosque! The inside of its dome is gold-plated and painted in beautiful blue and gold. It’s very bright and so intricate. It’s covered in Arabic scripture from the Koran. I loved the colors! 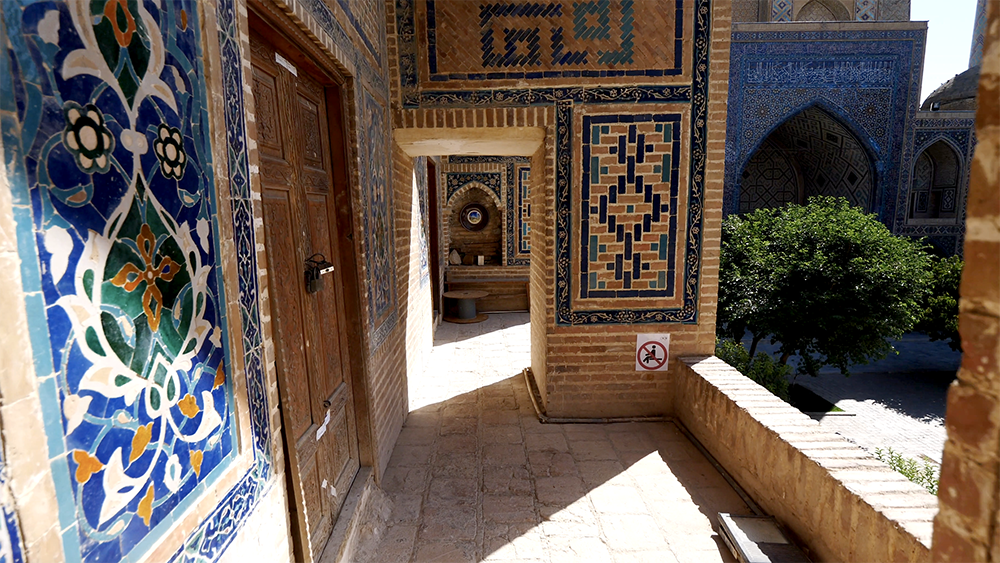 Next, we visited the Ulugh Beg Madrasah. We headed inside and climbed an ancient stairway to the second floor, where there was an open-air terrace that’s also a hallway. It was beautiful and had an awesome view of the courtyard below. We were near the students’ dormitories. The students came here already knowing the Koran and then chose what they wanted to study. They were astronomical and scientific scholars! 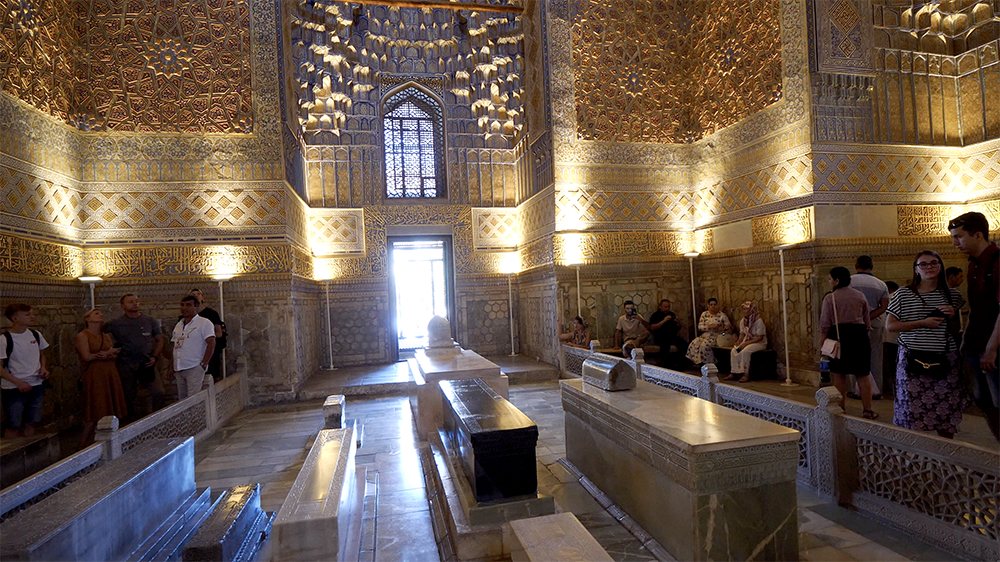 Then, we headed over to Gur-e-Amir, also known as the Mausoleum of Amir Timur, a conquerer and king who founded the Timurid Empire in Central Asia. A 2-minute taxi ride there cost 10,000 som/ $1.05 USD. It was quick but it was a great way to get out of the 100-degree heat for a bit! 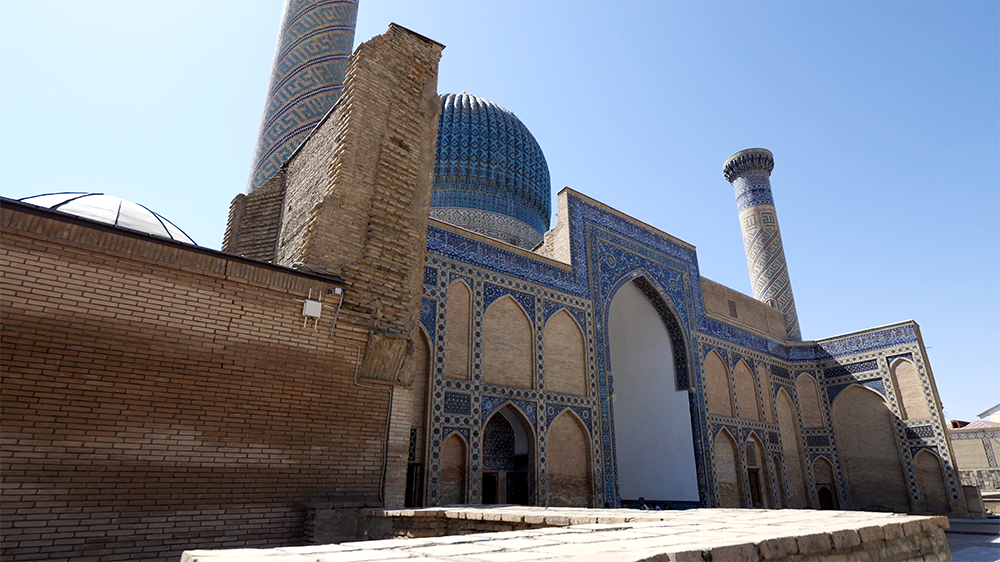 It costs 25,000 som/$2.63 USD for foreigners to enter the mausoleum, while it only costs 1,000 som/$0.10 for Uzbekistan residents. There was a beautiful courtyard and I could see an irrigation system. It didn’t look finished, or like part of it had been destroyed. There was a dome and two minarets and the foundation of an old madrasah that was destroyed.

We headed to the tomb, where Amir Timur’s spiritual teacher is buried. Timur is also buried there along with the most important people in his life. There’s also an unknown tomb there. No one knows why it’s there! The building was a testament to his power. It was beautiful and symmetrical. At the back of the tomb is the crypt, but only VIPs are allowed inside. 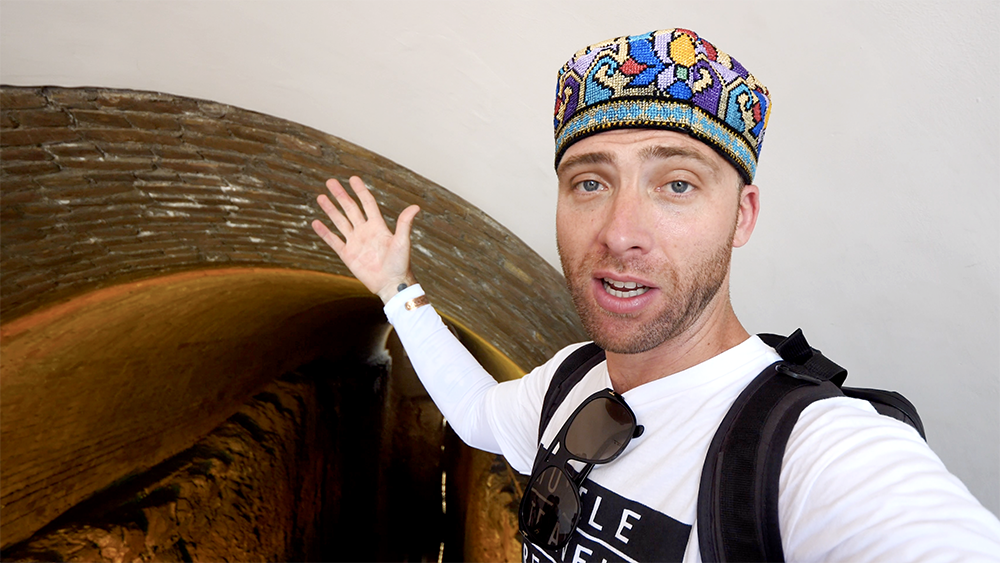 Next, we visited the Ulugh Beg Observatory at the Complex Museum of Mirzo Ulugbek. We headed to the observatory, where the Timurid astronomer Mirzo Ulugh Beg did his research and viewed the stars. Inside the museum is a painting of him and another of him and his colleagues. There were 15th-century astronomy instruments, models, and more inside. 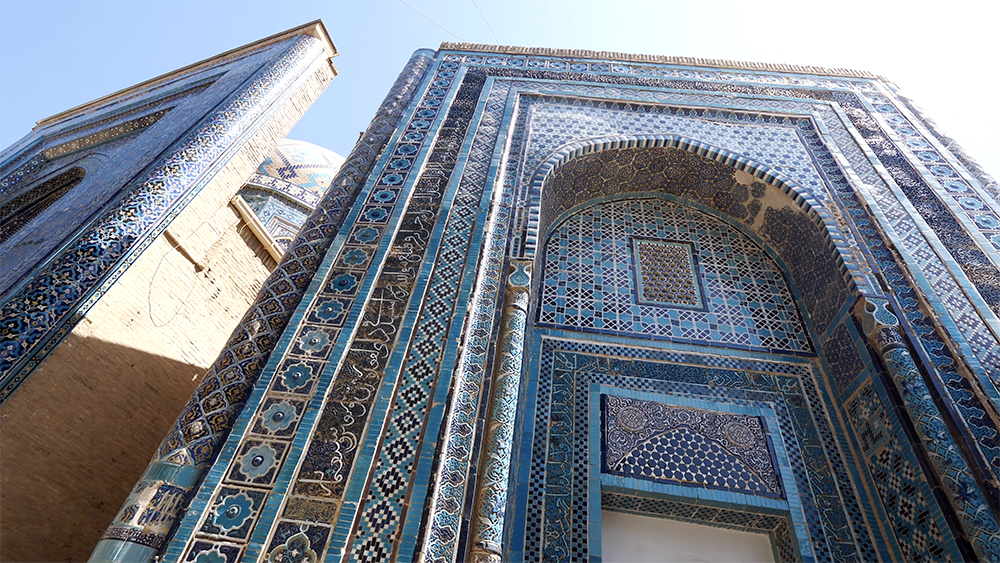 After another $1 USD ride, we arrived at the Shah-i-Zinda Necropolis. It’s made up of temples, mausoleums, and other buildings of varying architectural styles, which were added onto the complex from the 11th to 19th centuries. It’s massive and beautiful and again, shows the power of this ancient city. 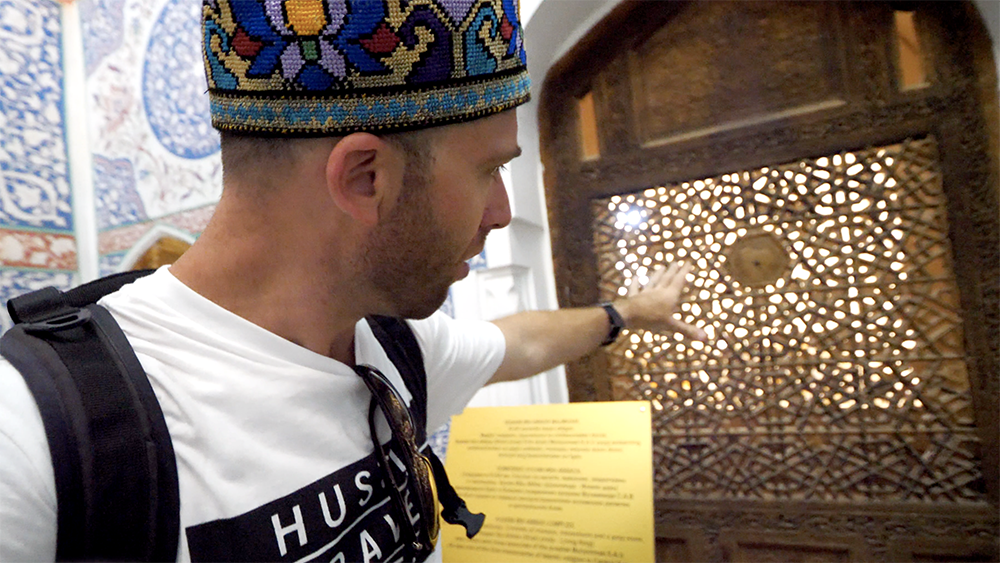 We climbed a stairway to the top of the massive mausoleum. There are 11 tombs in the necropolis in total! At the end is the mausoleum of the cousin of the prophet Muhammad! Each building is really gorgeous. 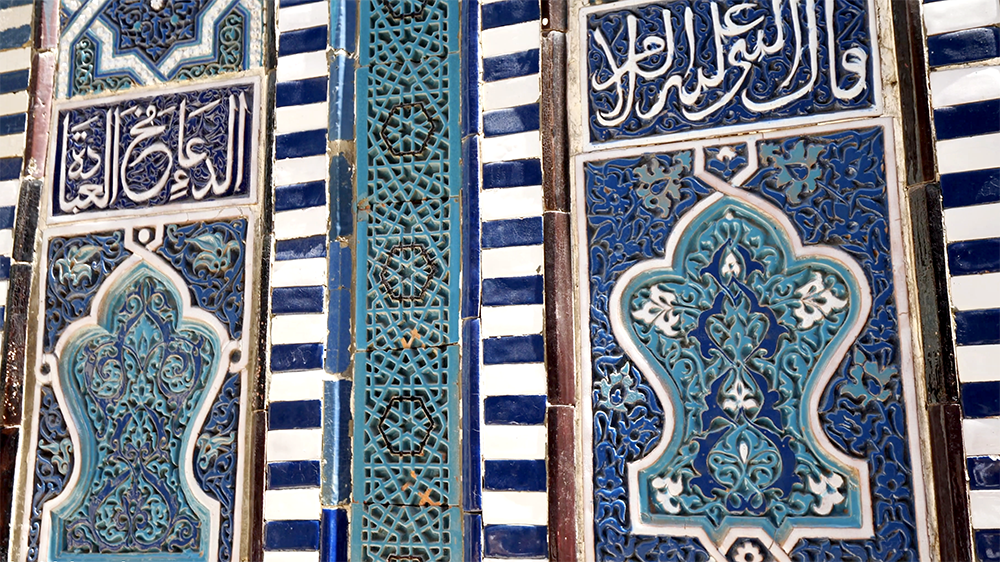 We entered the Kusam Ibn Abbas Complex, which was built between the 11th and 13th centuries. It consists of a mosque, mausoleum, and prey room. Kusam Ibn Abbas was a living king, cousin/close associate of Muhammad, and one of the first Islamic missionaries in Central Asia. His tomb was behind a sort of window. It was so beautiful and colorful. The tilework on these mausoleums has lasted 7 centuries!

Next, it was time to go to Samarkand Restaurant for lunch! I couldn’t wait to eat some authentic Uzbekistan food. I was starving! 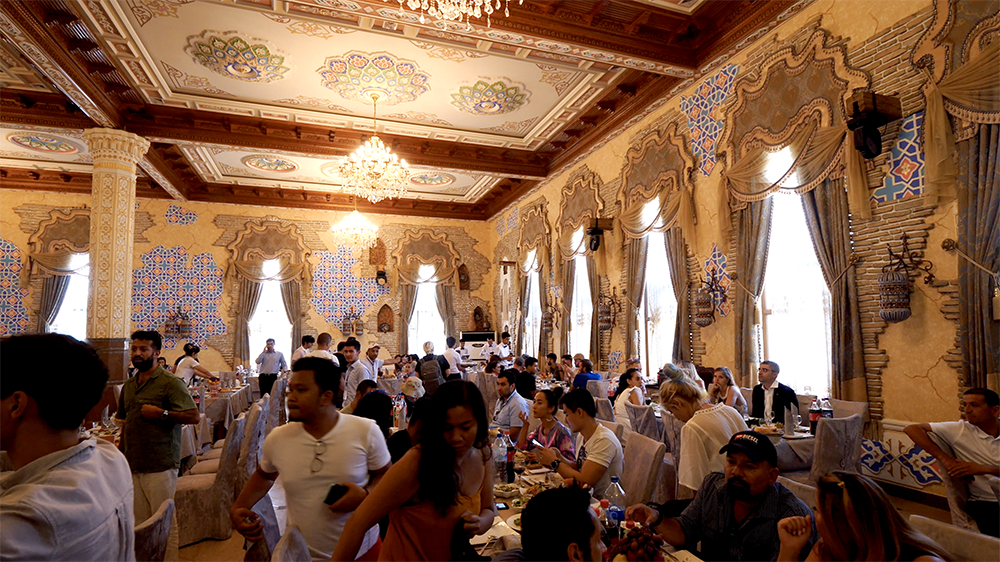 The restaurant had a huge dining hall with 20-foot ceilings. There were at least 25 tables inside. The authentic Uzbekistan food I had included bread, a fritter, a pepper, eggplant with salad, cauliflower, a Greek-like salad, and stuffed zucchini. The zucchini was moist and crunchy on the outside. 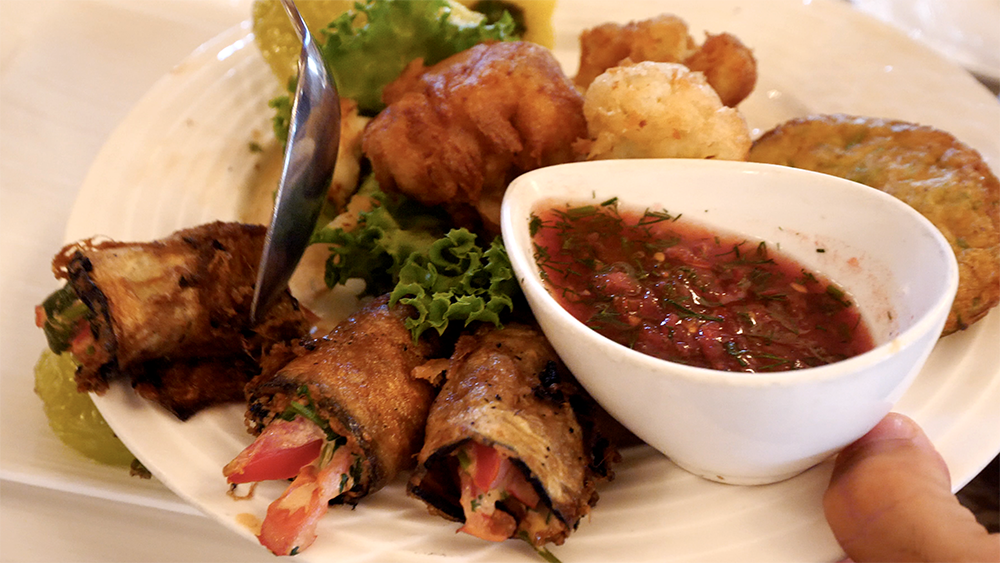 The fritter felt like a vegetable omelet, while the pepper was refreshing and not spicy at all. The ham salad contained peas and potatoes, and there were tomatoes, cottage cheese, and olives next to it. It was like the Uzbek version of a Greek salad! 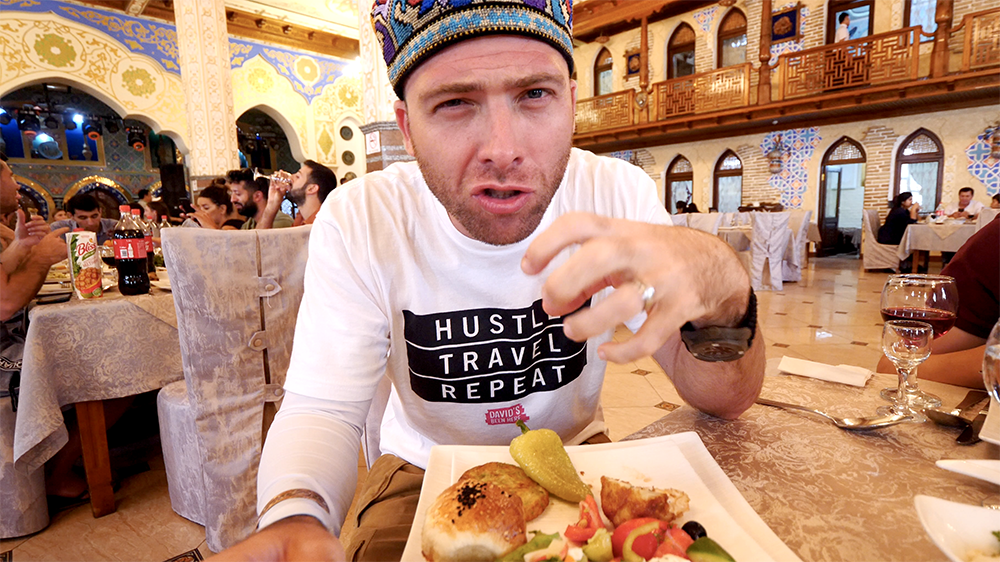 Next, I dove into the fried cauliflower. It was the ultimate cauliflower! Then, I tried a Samarkand-style somsa, which was fluffier and denser and rounder than others I’d had. It was so airy and crunchy with tender meat and onions inside. Then, I had a soup called Nohot Shurva with chickpeas, carrots, potatoes, and a huge piece of beef! The chickpeas absorbed the broth and the beef was so fresh, tender, and buttery! 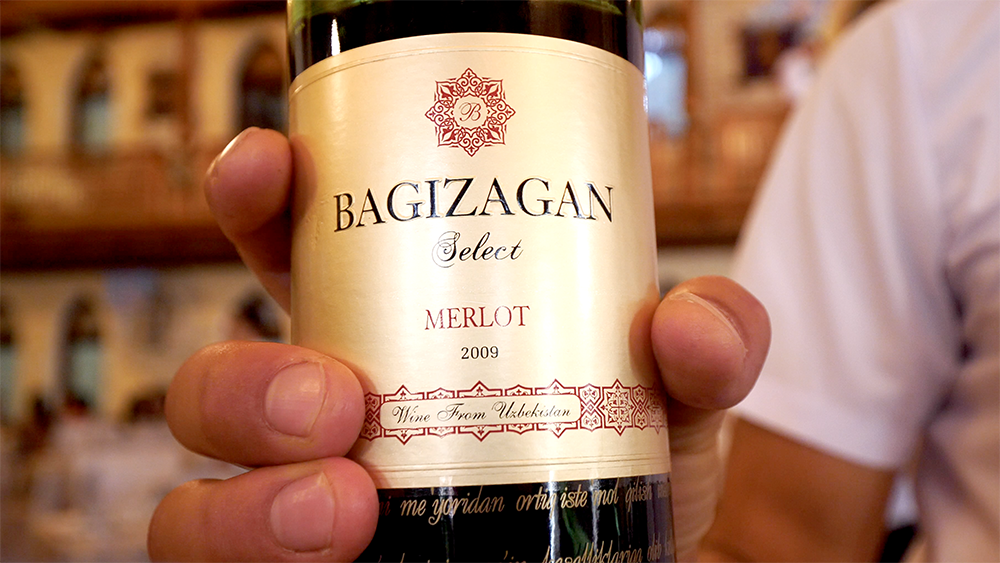 Next, we had some local Bagizagan Select 2009 Merlot, which was very young, fresh, and fruity. My authentic Uzbekistan feast continued with Samarkand plov, which was made with brown rice. The carrots were on top instead of spread throughout the rice. It also contained raisins, chickpeas, and beef. I loved how fruity and sweet it was! The raisins, carrots, and oil went so well together! 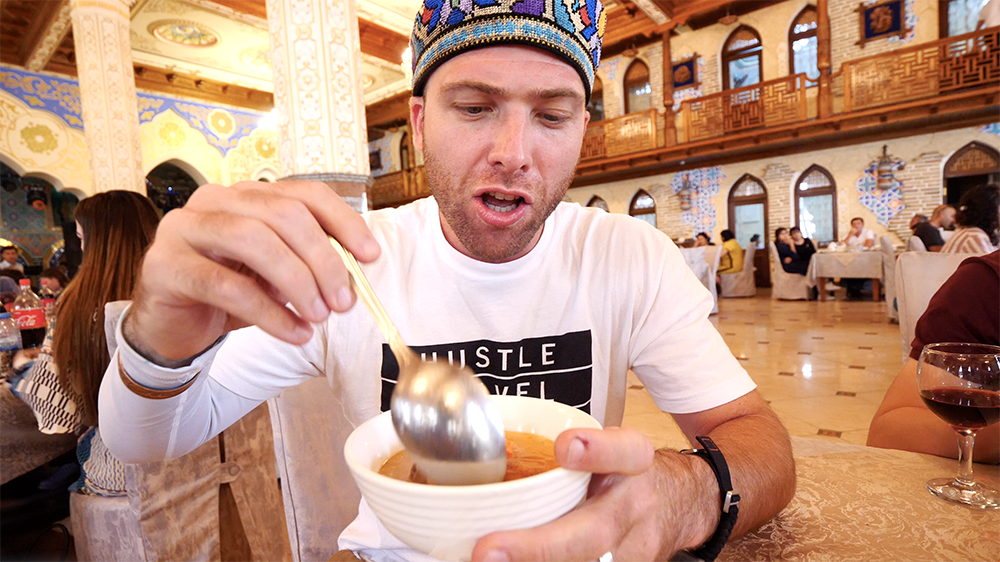 I hope you enjoyed exploring Samarkand with me! If you did, please give this video a thumbs up and leave a comment below. Also, please subscribe to my YouTube channel so you don’t miss any of my upcoming travel/food adventures!