On the morning of my fifth day in Armenia, I woke up bright and early and grabbed a quick breakfast at the Daravand Guest House and set out to explore the resort town of Dilijan! Join me as I visit a local deer sanctuary, explore a medieval monastery, learn to bake Armenian gata bread, and have a huge feast in Armenia’s Little Switzerland, Dilijan, Armenia! 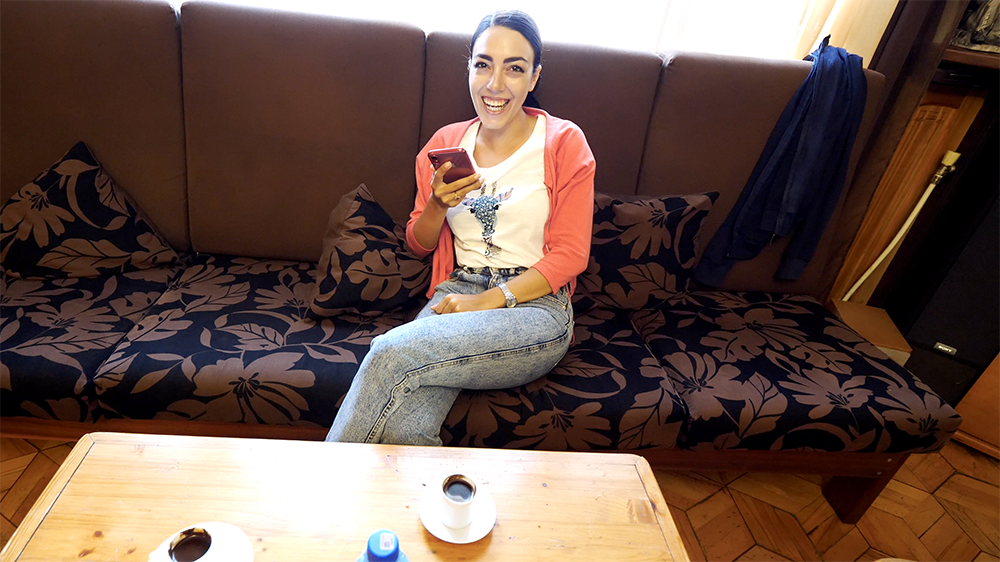 My day began at Daravand Guest House. This place is awesome! It’s in the middle of Dilijan National Park, which boasts mountains and greenery for as far as the eye can see. I couldn’t wait to have breakfast and explore the national park and a monastery before lunch! 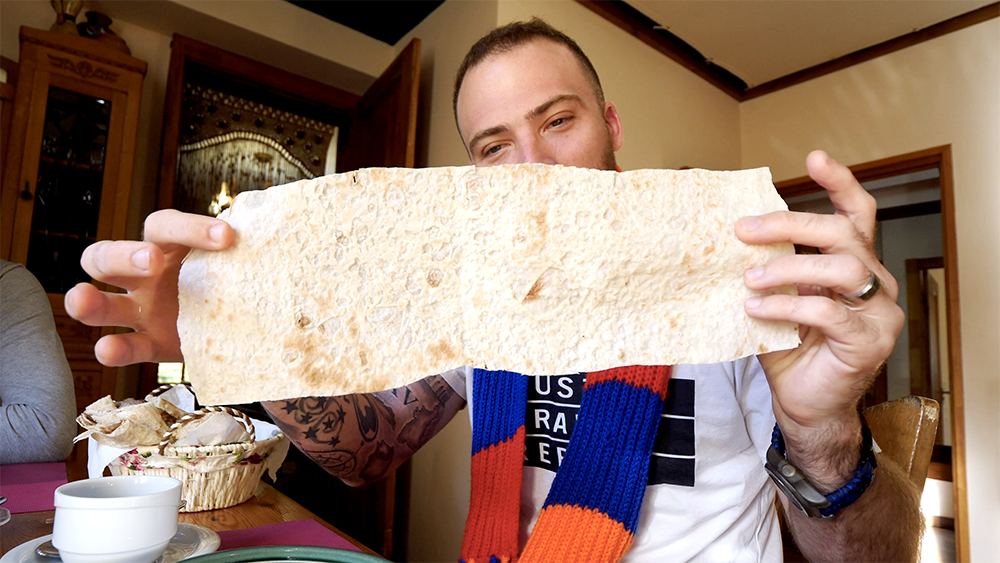 The food at the guest house is so good! I started with some thick and super strong Armenian coffee. Then, we moved on to some lavash (Armenian flatbread), eggs, cheese, sour cream, and honey. I rolled some egg in the lavash to make a sandwich and dipped it into the sour cream. It was so amazing! The lavash is so tasty and the sour cream is nice and organic. This is a typical Armenian breakfast! It’s simple but filling!

Because the Armenian coffee is really thick, there’s always some left in the bottom. After you finish it, you can flip your cup over onto your saucer and get your fortune read. My guide Lusine read mine – she said I was going to have a crazy day! 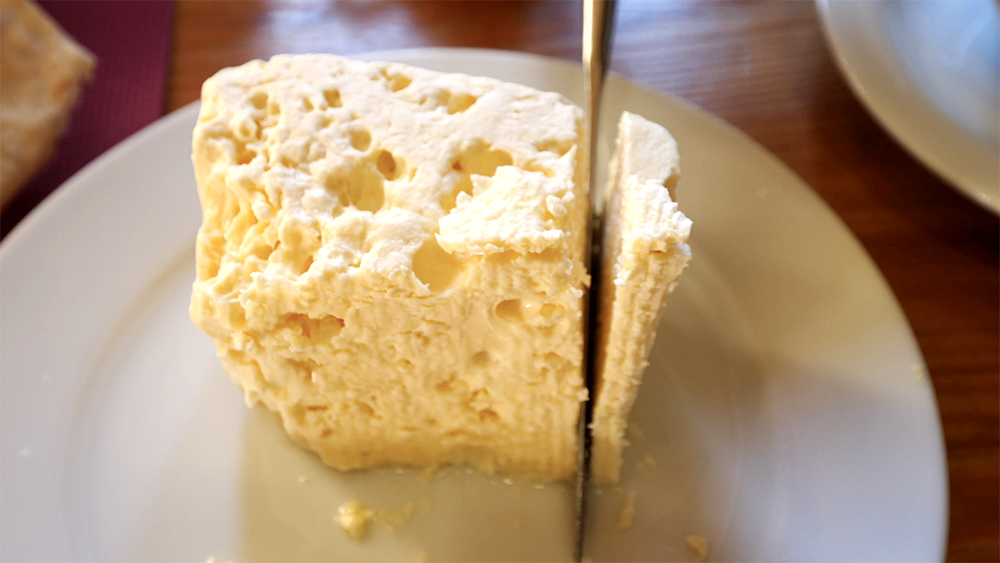 The Daravand Guest House has 9 rooms and a cottage. It’s a great place to stay when you come to Dilijan. After chatting with the owner for a bit, it was time to leave. I couldn’t wait to bake Armenian gata and explore Dilijan, Armenia! 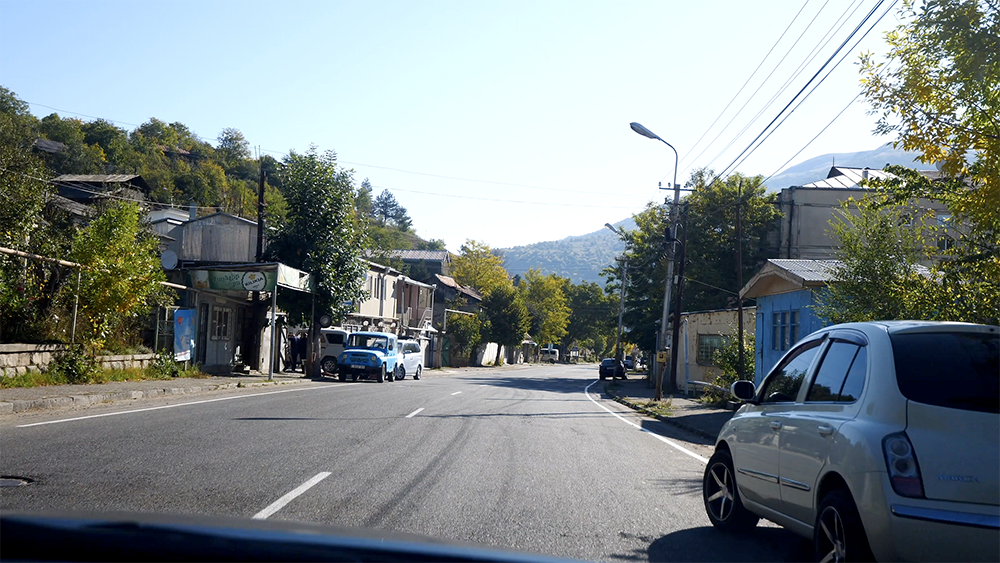 We headed out to explore Dilijan National Park. It’s a cozy corner of northeastern Armenia and is sometimes called Little Switzerland. Lots of famous Armenian artists, composers, and filmmakers. You can also see traditional Armenian architecture in Dilijan. The area is great for hiking, mountain biking, and enjoy fresh air! 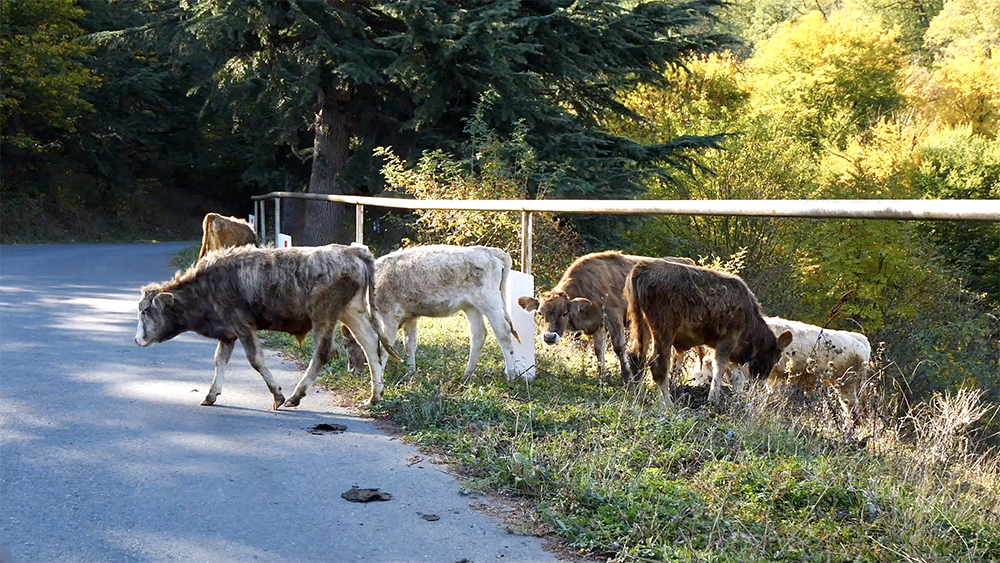 As we rode around the mountain, I enjoyed the beautiful scenery and saw some cows by the road! There were cows everywhere. Then, we arrived at the red deer breeding center and enjoyed some more coffee. It was nice, especially with the chilly weather. 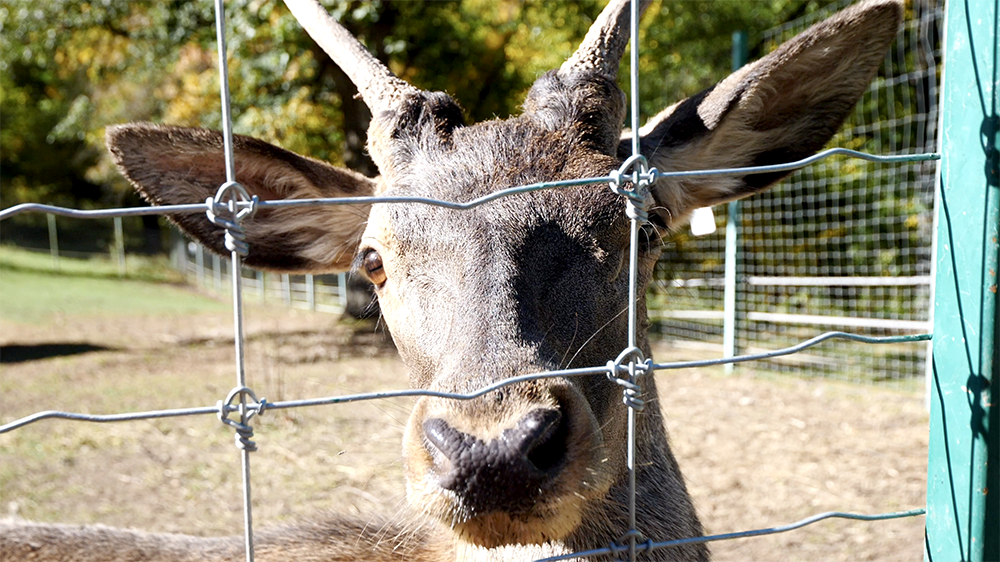 Usually, when you come to the red deer breeding center, you feed them from outside their pen, but Lusine and I got exclusive access to go inside the pen. There was a second pen inside the larger pen. The smaller pen contained younger males, while the dominant male was in the outer pen with the females. He had huge antlers! They keep them separate so the large male won’t be aggressive, but he still patrolled the outside of the smaller pen to intimidate the other males.

Check out my VIDEO: The Rock-Hewn Churches of Ivanovo, Bulgaria

The goal here is to breed them and re-release them into the wild. We were given some leaves to feed them and the deer came right up to us! 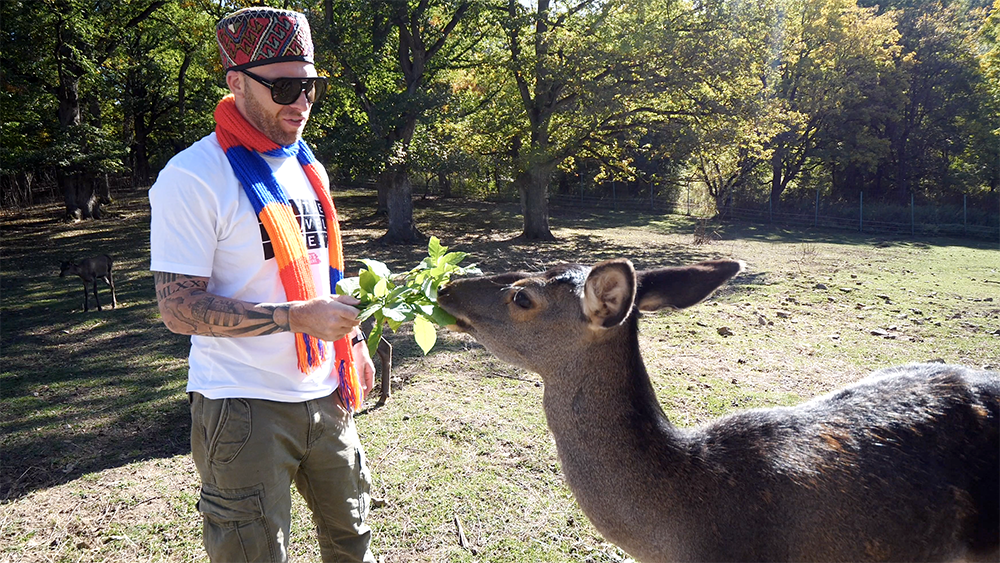 Then, we headed to Haghartsin Monastery, a 10th-century monastic complex hidden in the forest. It’s about 15 minutes from Dilijan and you have to take a beautiful road to get there. It was one of the educational and spiritual centers in the area and boasts iconic medieval architecture. 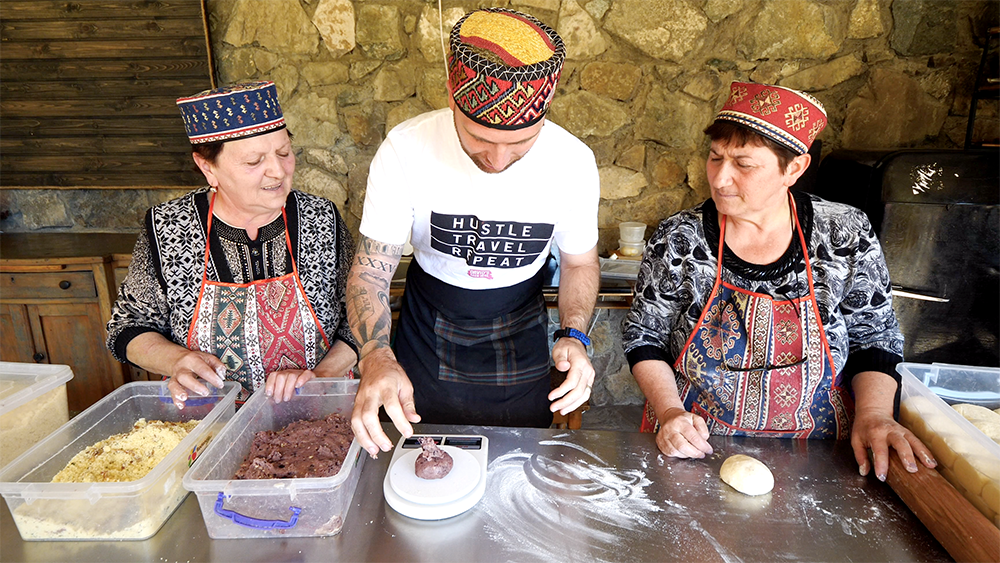 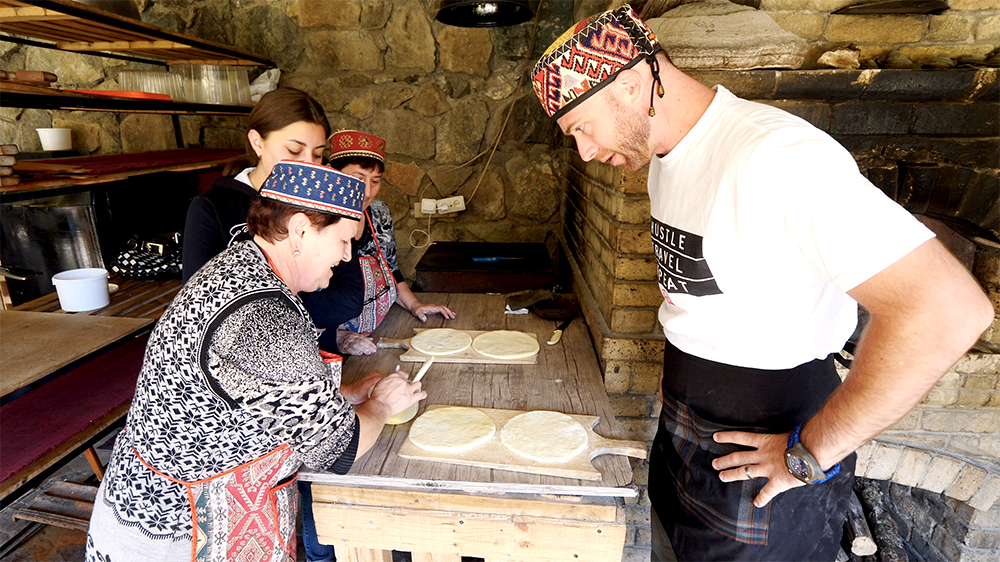 I grabbed a 100-gram ball of blueberry filling and spread out my dough. I added the blueberry ball and closed it, turned it into a ball, and rolled it out. From there, they brush it with egg wash. Then, they score it with a fork. I drew a face on mine and then they went in the oven for 10 minutes. 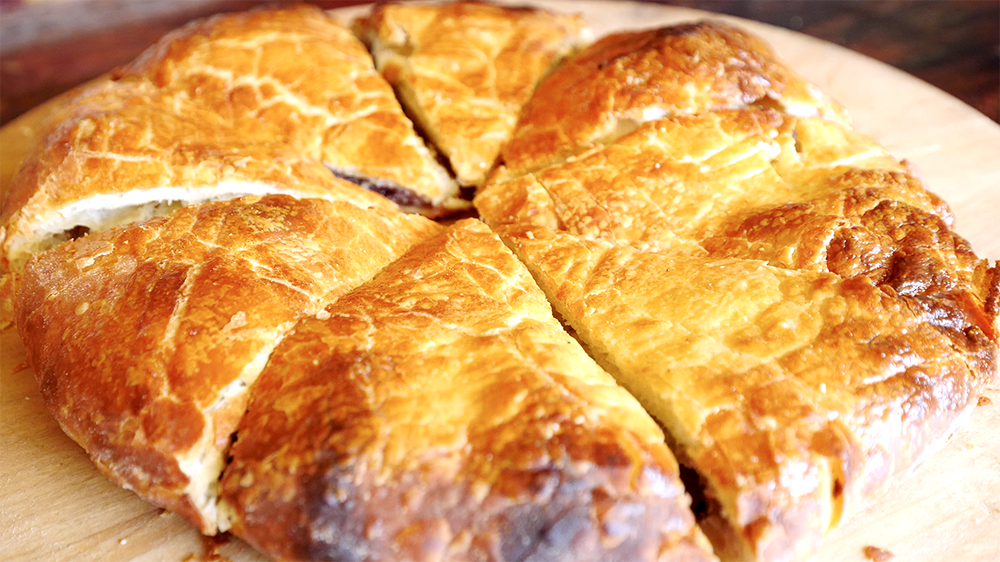 Then, the gata is cut like a pizza and served with blueberry jam. It also comes with two teas called rosehip. It was very minty and light. The gata was so tasty and sweet. The blueberries were a little different. The dough inside was soft, while the exterior was crunchy. The jam was amazing and so addictive! It was the sweetest bread I’ve ever had in my life!

Next, we explored the monastery, which was reconstructed by a man from the United Arab Emirates who admired the site and wanted to support the reconstruction efforts. Then, we headed to the 13th-century refractory. Inside was a photo of the monastery before the reconstruction. It was run-down before. There was a huge difference between then and now! 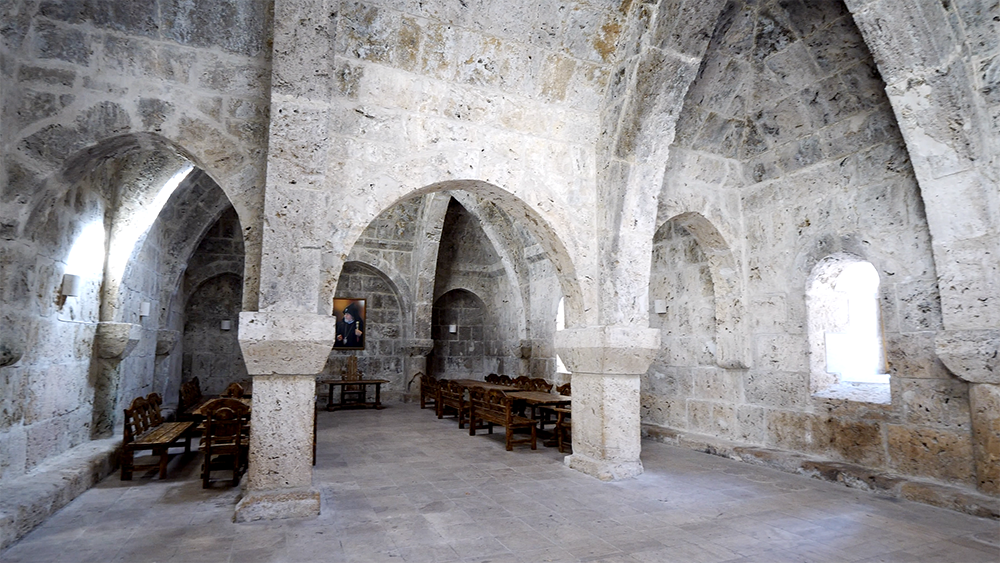 The refractory has a dining hall for the monks who lived in the monastery. It has 12 columns that represent the 12 apostles of Jesus Christ. All of the construction inside is from the 13th century. The tables inside are a great example of traditional Armenian craftsmanship. 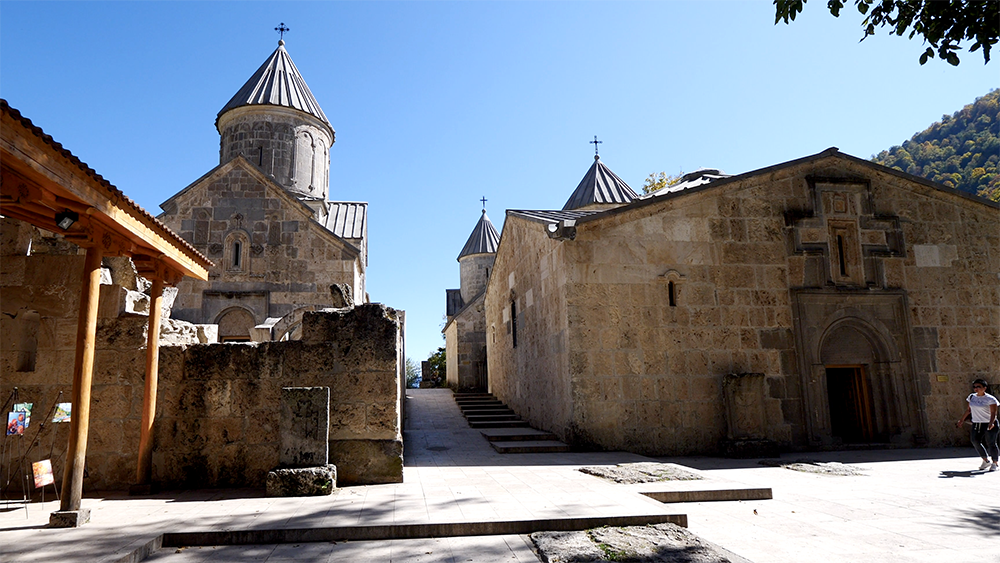 The complex consists of 4 churches, a refractory, a prayer hall, and khachkars. The oldest church in the complex is St. Gregory the Illuminator Church and is from the 10th century. It’s a cross-shaped domed church and is an iconic example of Armenian architecture in the Middle Ages. The church is really tiny and has two benches and an altar. The walls were made of huge stones. It was beautiful! 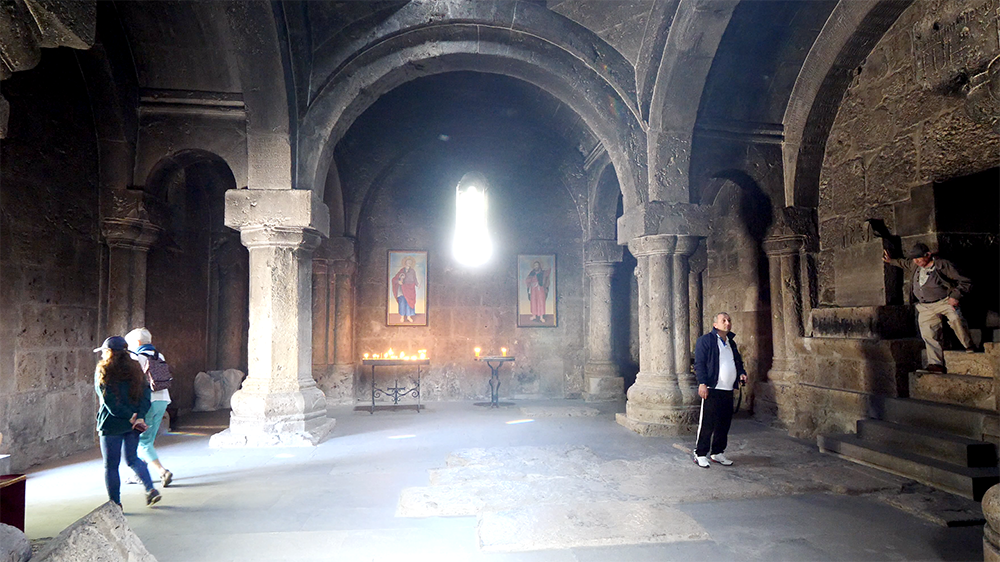 Check out my VIDEO: What to Do in Iznik, Turkey

Then, it was time to have lunch in Dilijan! We arrived at Tava and Losh Restaurants, which are in the same building and offer modern Armenian cuisine using local, organic ingredients and traditional cooking methods. Losh is a vintage restaurant on the ground floor, and Tava is more modern and on the second floor. It was very funky and colorful inside. They have lots of wine on the walls! 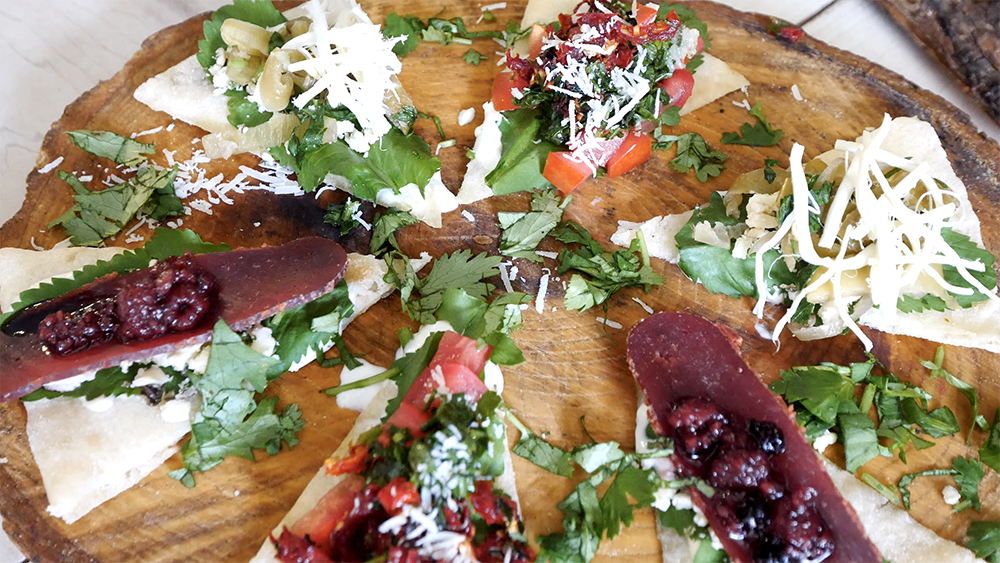 First up were appetizers with lots of local cheeses made with local spices, bread, herbs, basturma, and more. I visited the kitchen, where there was a huge brick oven. The aroma in the kitchen was incredible. I couldn’t wait to eat! 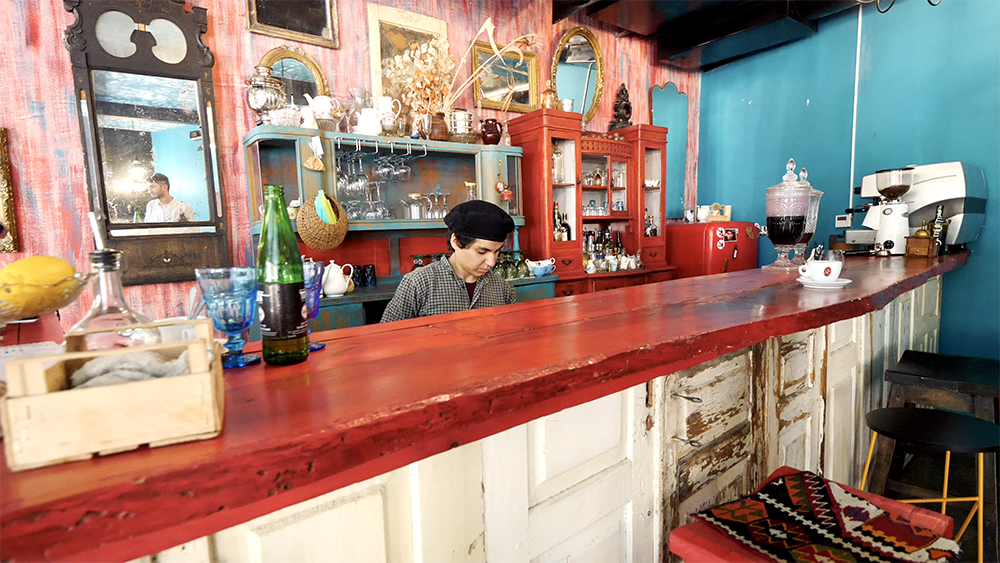 Back at our table, we had a feast including bruschetta, cheese and bread; couscous with mushrooms; chicken with tomatoes, onions, and peppers; different sauces; Armenian noodles; and pork belly! 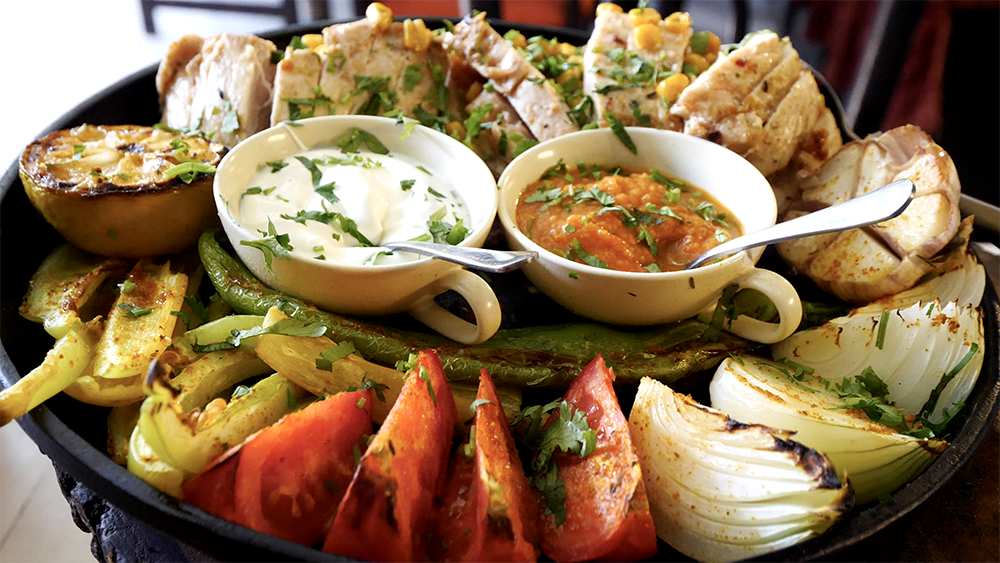 I started with the bruschetta. There were a few different ones. I loved them all, especially the one with basturma and a berry jam. I loved the combination of salty and sweet! Then I tried cheese with red pepper in it. It was like manchego! 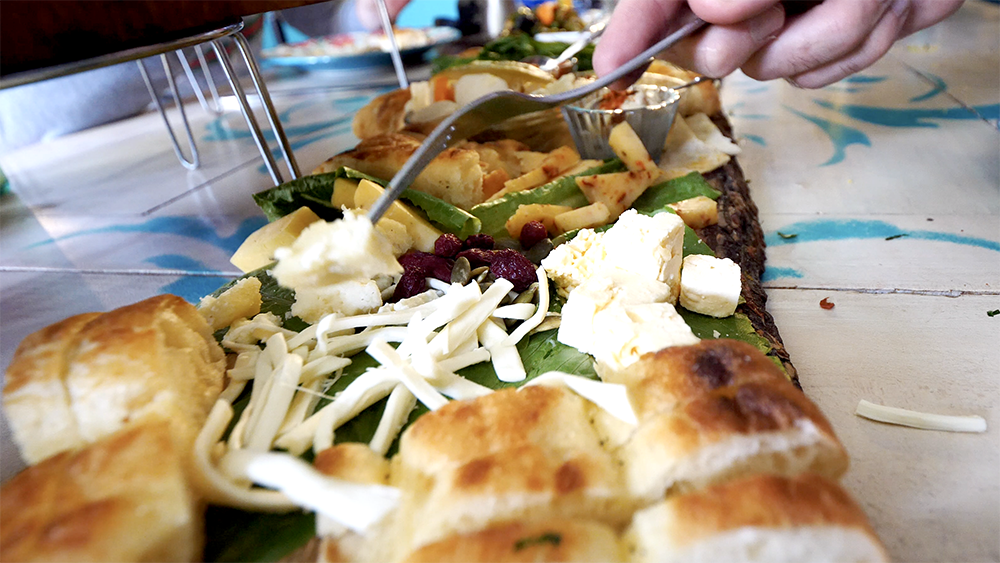 Then, I went for the couscous with tree mushrooms. It had smaller grains and was a little fruity, which the mushrooms were nice and earthy. Next was pork belly, which I put in a piece of lettuce with spicy sauce. It was nice and crunchy and the sauce wasn’t too hot. The chicken with the sauce was also amazing, as were the Armenian noodles! The noodles were so different and were almost like oily Chinese noodles.

Check out 5 Things to Do in Novi Sad, Serbia

This was like fresh, organic comfort food! I really liked the beans a lot, but the noodles and tree mushrooms were my favorites. There were also four different cheeses, including a string cheese and another that was like a creamier parmesan. It was so good! This adventure to bake Armenian gata and the feast in Dilijan, Armenia was so much fun. I couldn’t wait to explore more of this amazing country! 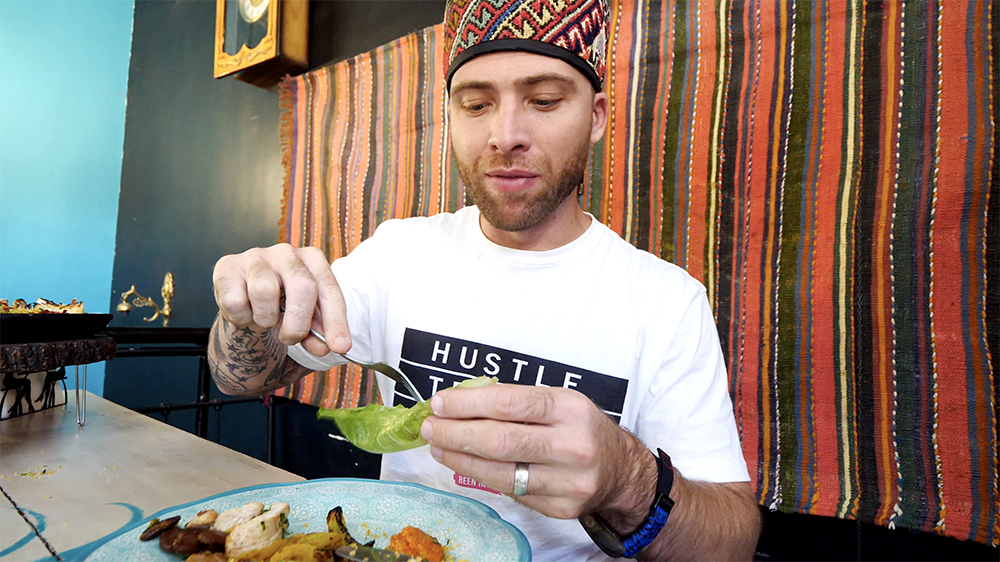 I hope you enjoyed coming with me to bake Armenian gata and have a feast in Dilijan, Armenia! If you did, please give this video a thumbs up and leave a comment below. Also, please subscribe to my YouTube channel and click the notification bell so you don’t miss any of my travel/food adventures! 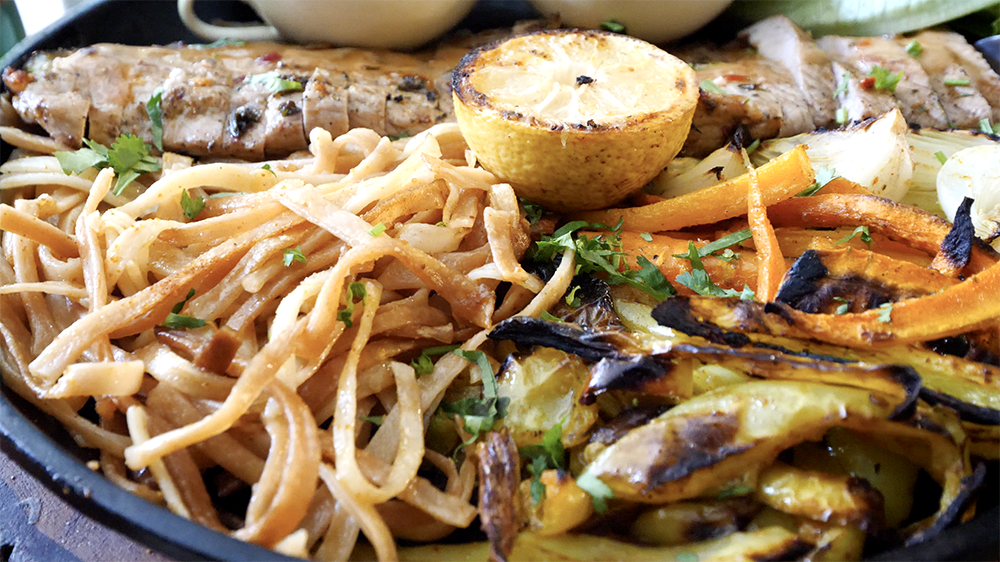 Special thanks to my friends at Armenia Travel for their kindness, hospitality, and for arranging my trip. I couldn’t have done it without them!  Also, if you would like to visit Dilijan, please contact Lusine.