On the night of my epic sixth day in Kerala, India, I headed into Munnar to go on an awesome street food tour! Come along with me as I try tons of local Indian street food in Munnar, including homemade chocolate, appams, and tapioca, as I explore this beautiful mountain city in Kerala!

I started my night in the car on my way into town. Munnar is the tea capital of southern India, but there’s a lot more there than tea! This town is actually a hill station up in the mountains. It has epic views and is also a great place to try lots of delicious Indian street food! I couldn’t wait to try some! 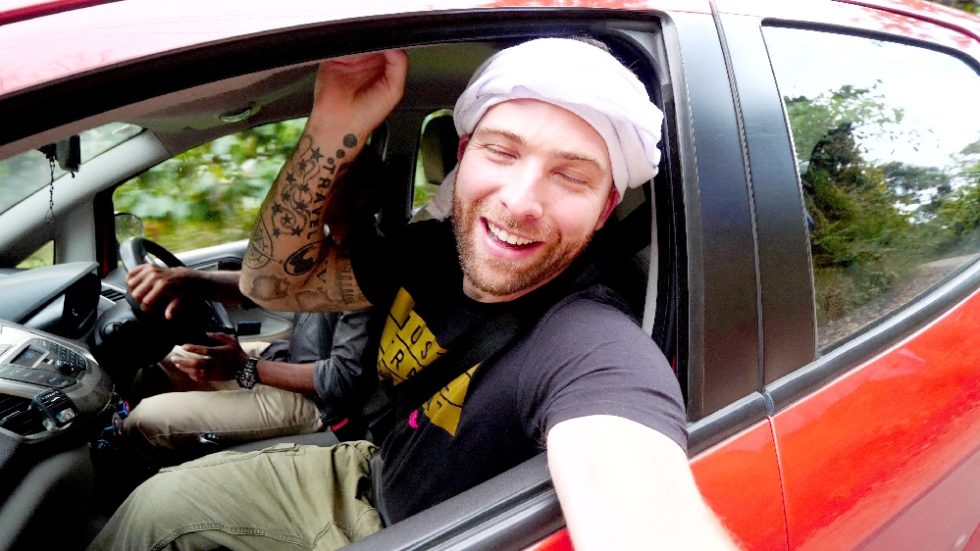 From my hotel, the Dream Catcher Resort, it was a one-hour drive to the town. It takes so long because the roads are winding, steep, and full of potholes. There are also lots of dirt roads that wind through the forest. Let’s go to Munnar! 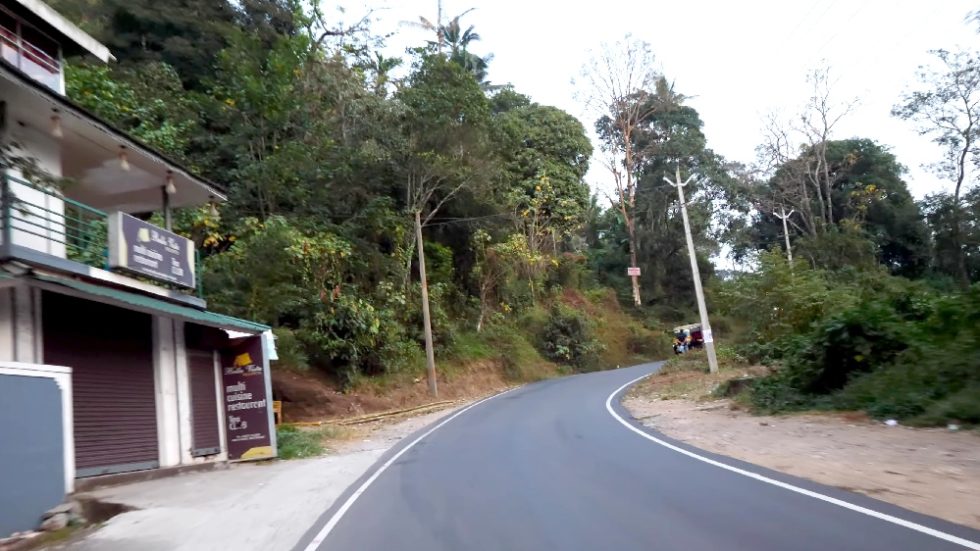 My friend Sibi from the Dream Catcher Resort came along with me on my street food adventure. We passed through a market and several other similar small towns on the way to Munnar. There are a lot of people here from the neighboring state of Tamil Nadu. I was looking forward to the street food. I was hoping for some puchka, or pani puri!

We took a steep climb up the mountain for about 1 km and passed through another junction. The sun had just set and there was a mist hanging over the mountains. There were lots of cars and homestays lining the road. This was the hilliest place I’d ever visited. It was kind of similar to Cameron Highlands in Malaysia, but even that wasn’t this hilly. We were 20 minutes from Munnar, in a valley between two huge mountains. 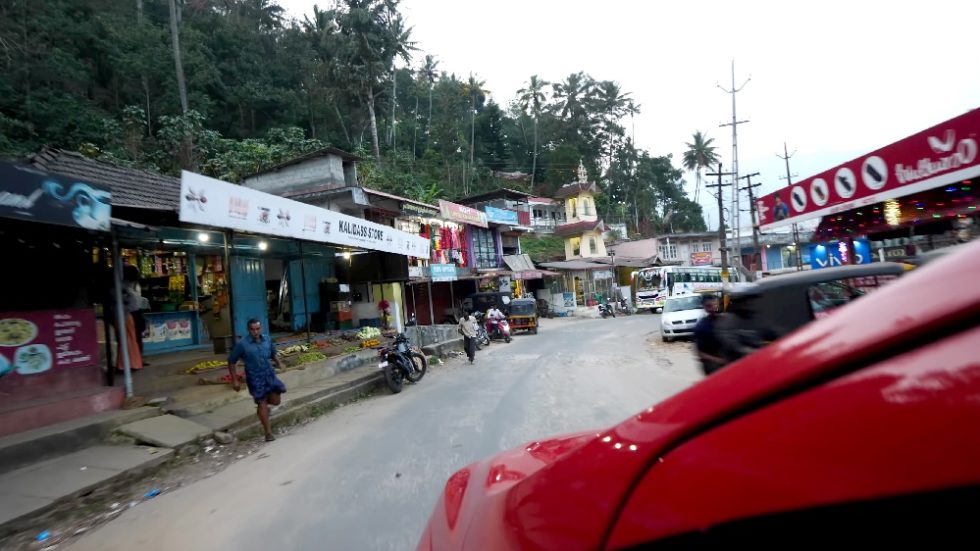 There were dozens of tea plantations everywhere. We reached Old Munnar and then the actual town one kilometer later. We went to go look for some pani puri. It was kind of chilly outside! I really liked it. 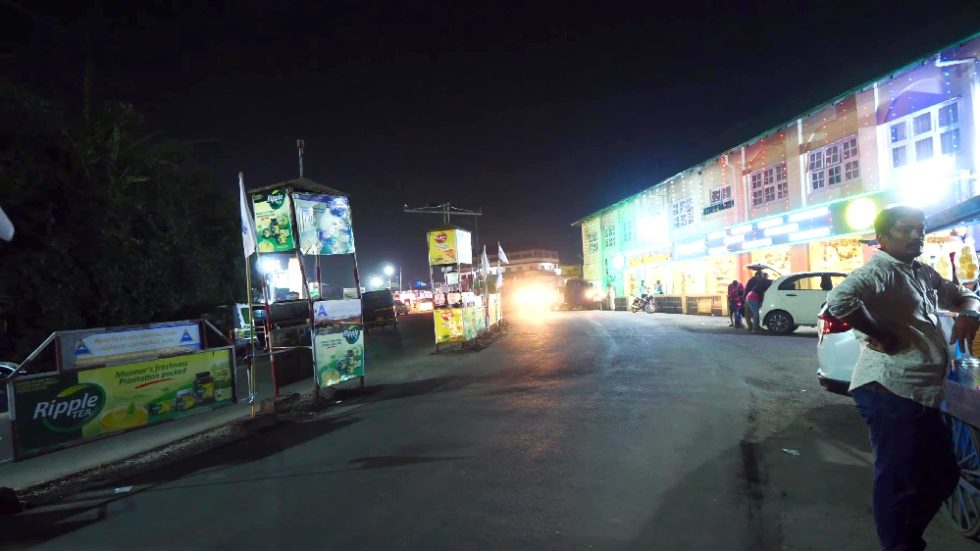 We found a stall called Ebin Bani Poori selling pani puri, noodles, rice, and a sizzling masala. It all looked so good! I started my Indian street food adventure in Munnar, Kerala, India with some pani puri! 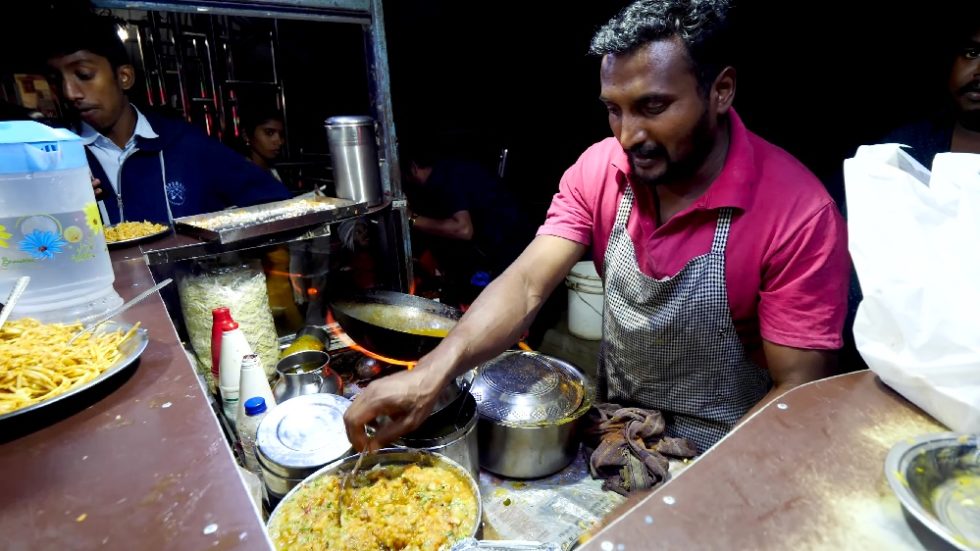 Instead of a vendor who kept giving us more pani puris until we told him to stop, this guy only gives you three at a time. It was so good! It wasn’t very spicy and reminded me of the floating pani puri I’d had in Bangalore. It was so full of pani and was super crispy! 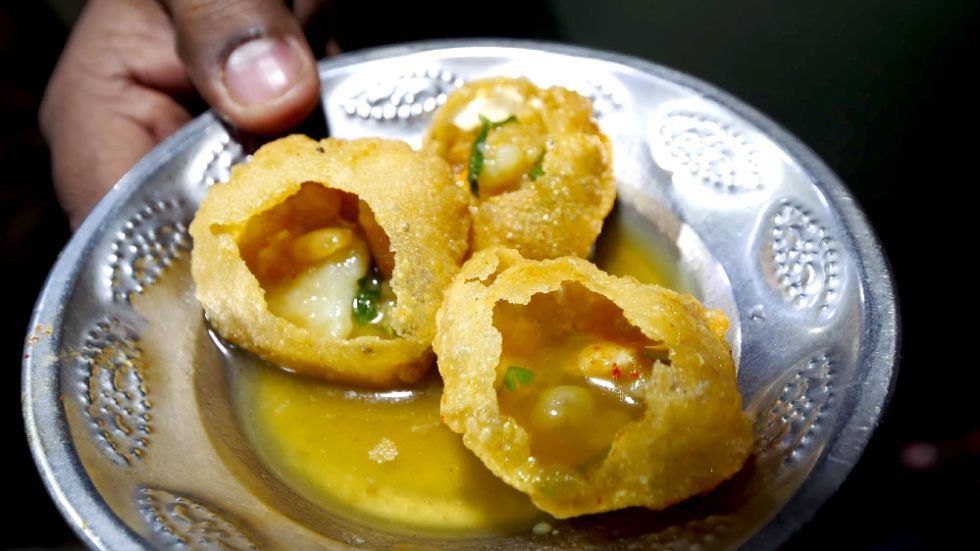 We moved on to another Indian street food vendor in Munnar selling parottas and string hoppers. He also had chicken fry and quail fry. They also sold a very interesting tapioca dish with curry leaves, peppercorns, and chilies on top. It looked too good! They had some tables set up between the vendors. 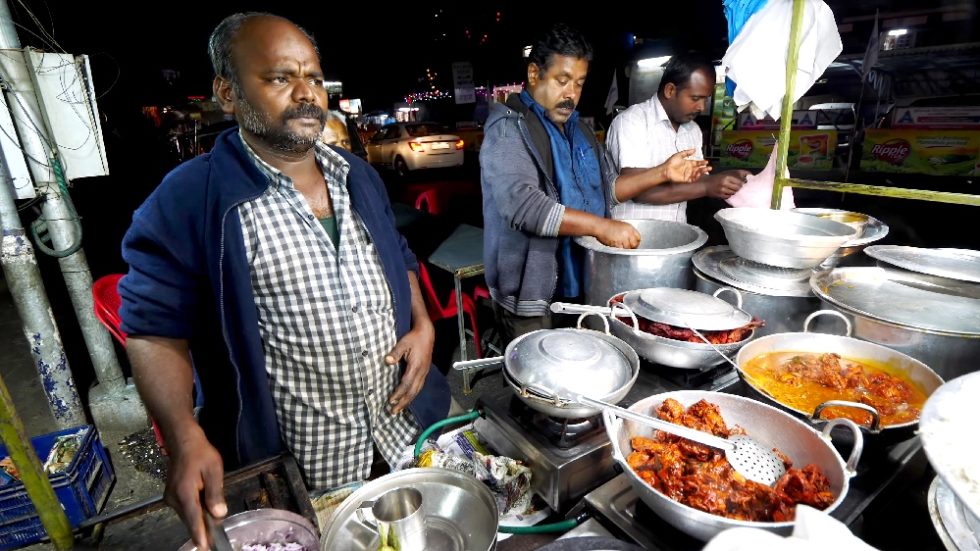 Because there are a lot of Tamil people in Munnar, they make the dosas the Tamil Nadu way. They’re crispier, fluffy, and very different from the kind they usually make in Kerala. 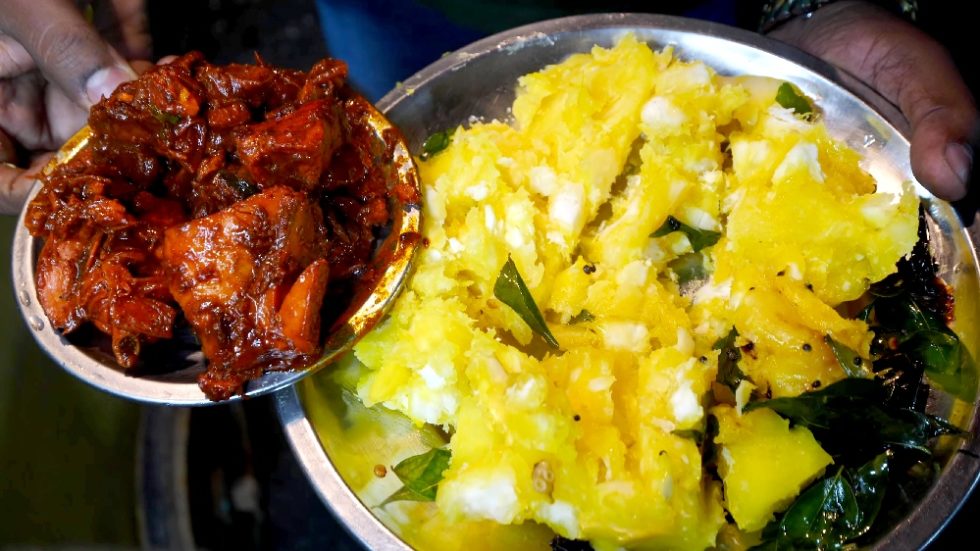 I started with chicken fry and tapioca, which you eat together. You break up the chicken and mix it with the tapioca. The tapioca was still a little hard but it was good. The masala on the chicken wasn’t too spicy. I loved the chicken with the curry leaves and the peppercorn. The tapioca was nice and mushy and tasted like cassava. Tapioca is a specialty in Munnar! 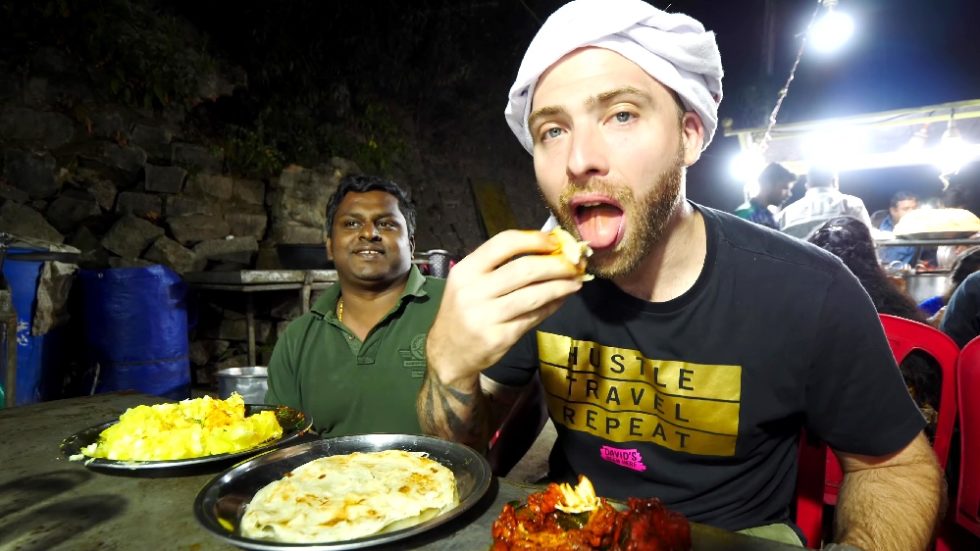 I could not get enough of the chicken, masala, and curry leaves. The chicken’s skin was so crunchy but the flesh was nice and soft. Mixed with the dense tapioca, it was really nice. And while the meal wasn’t amazing, it was different! I had never combined chicken fry with tapioca.

Check out my VIDEO: First Impressions of Munnar – The Tea Capital of South India in Kerala, India

Next, we had a parotta, which was flaky with lots of layers. I broke off a piece of the chicken, which was still hot, and had it with the parotta. Then, Sibi brought me an appam, which is similar to a dosa as it’s made from the same ingredients: fermented rice and lentils. 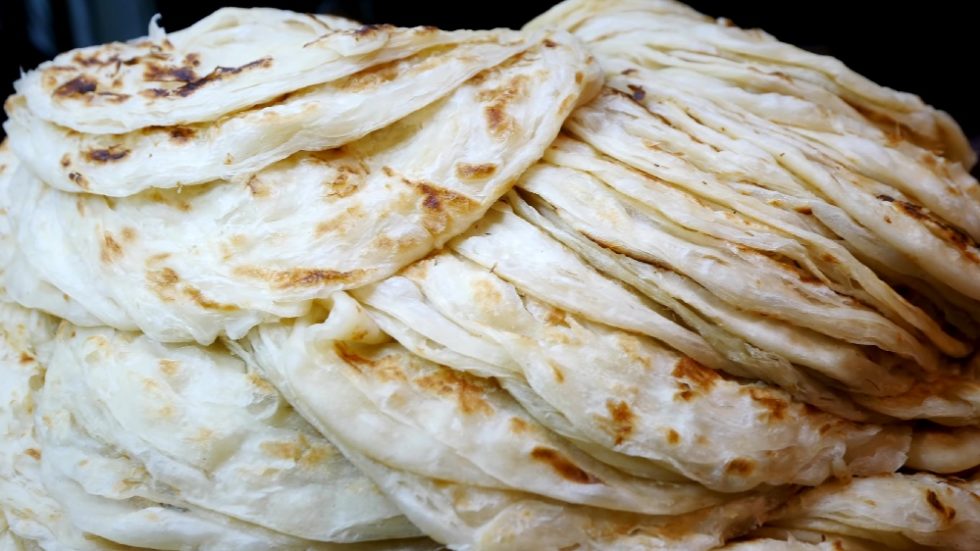 It’s not crispy like a dosa, though. It was really good with the chicken fry. I loved the combination. It was so good, but I was starting to fill up from all the doughiness of all the carbs of this Indian street food meal in Munnar! 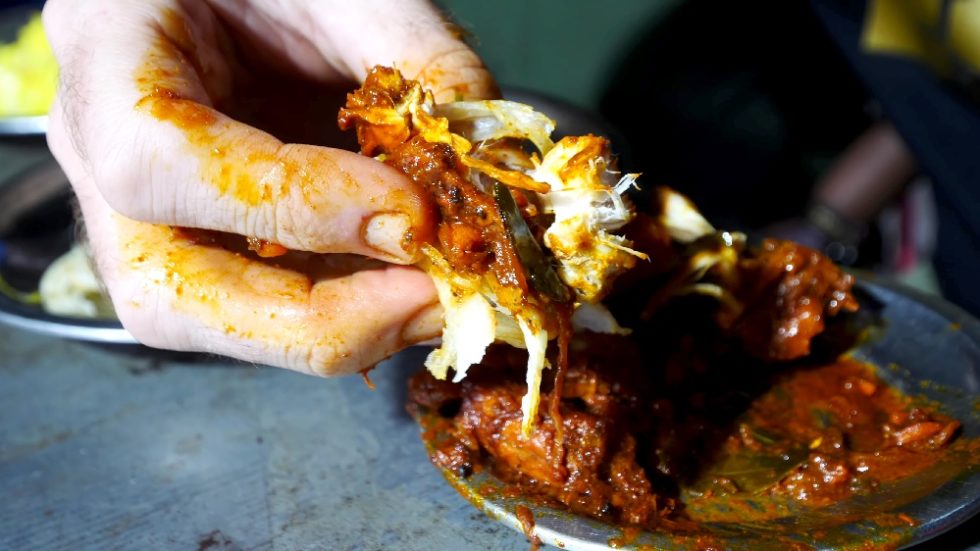 The appam was the best! The doughy part absorbs all of the masala and is so freaking tasty! 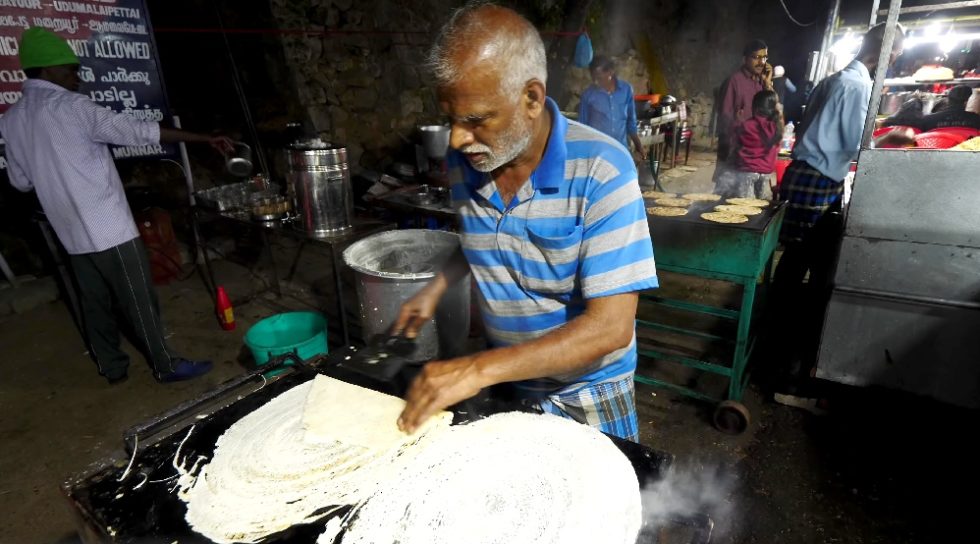 I watched the vendor make more parottas and dosas. They were really big and crispy. He even put some egg and red pepper chili on them. They looked incredible. Most of the nearby people were eating dosas. 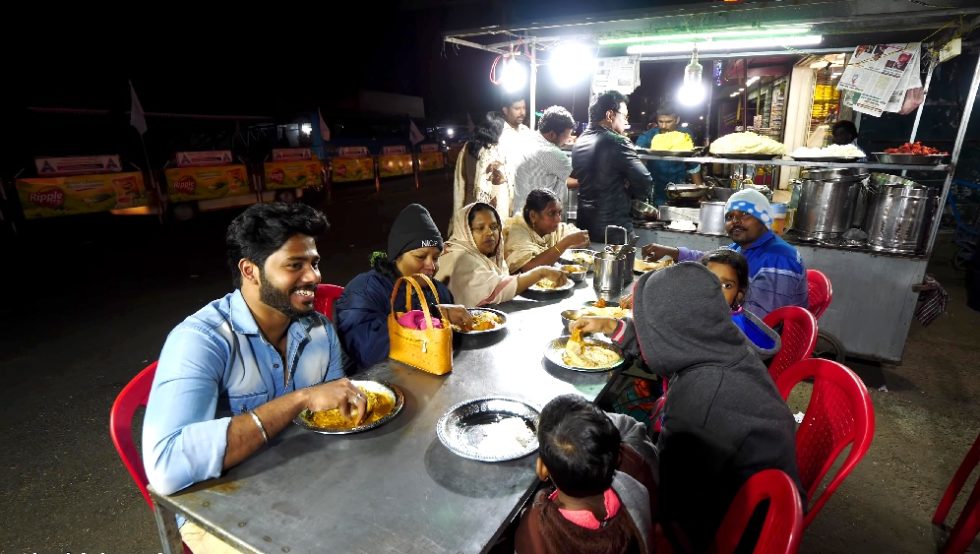 We passed a small Hindu temple and saw some vendors. We also saw a huge Christian church. The streets were super busy with people. There were tuk tuks and people everywhere. I also saw another church and saw some people carrying sugarcane as an offering for a Tamil festival called Pongal. 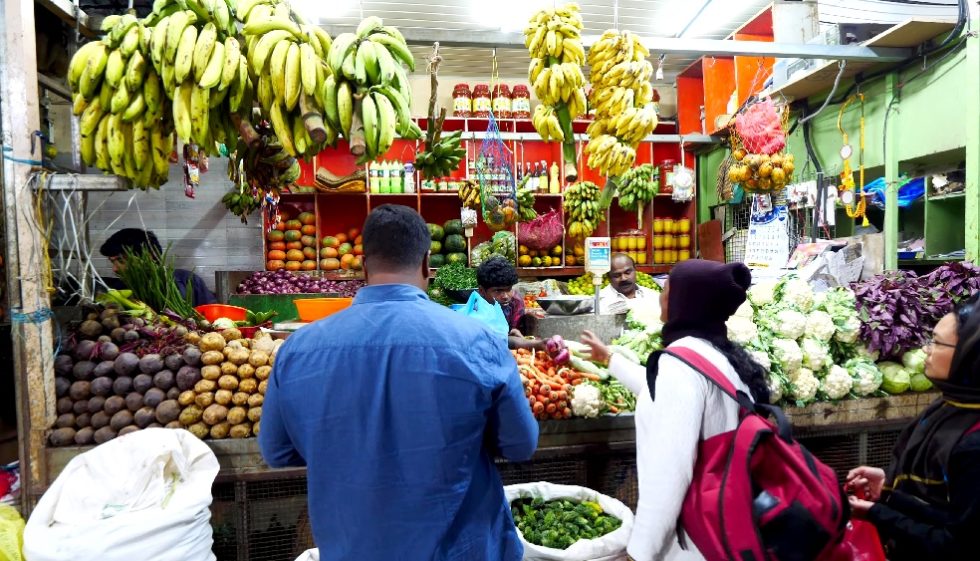 Further on, we saw lots of fruits and vegetables in the market, as well as rosaries. There were tons of bananas. We were heading to a homemade chocolate place. I’d had some in Thekkady but didn’t know they had it in Munnar as well! This whole market was a labyrinth of lanes. This area was a covered market. There were vegetables, fruits, and spices here.

To finish our Indian street food tour in Munnar, we stopped at M.S.P. & Sons Homemade Chocolate, which sells 21 kinds of chocolate. I started with some homemade chocolate that looked like it had vanilla inside. It was dark chocolate but it was also milky and sweet. It was so good! Then, I tried some Rice Krispies chocolate, which contained puffed rice. I liked it a lot. I loved that it had darker chocolate than the first one. 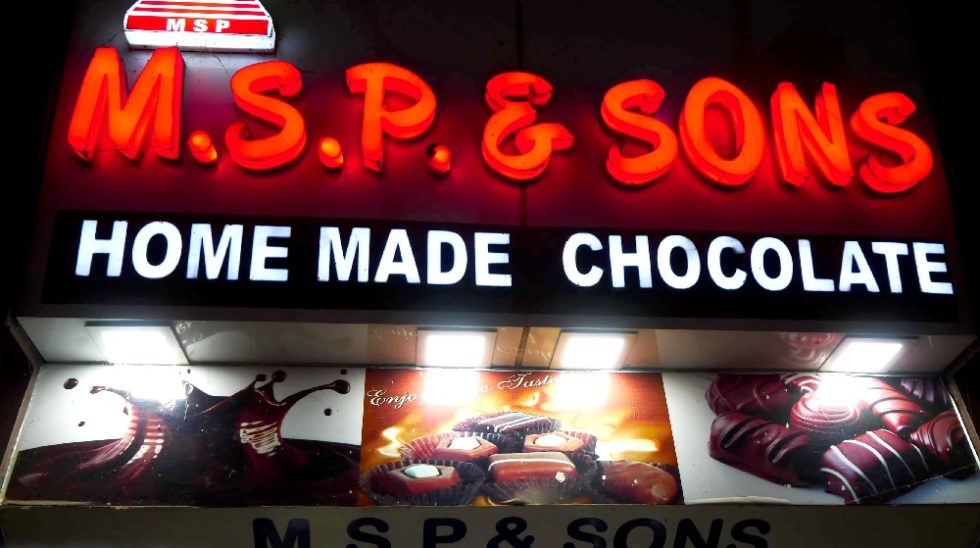 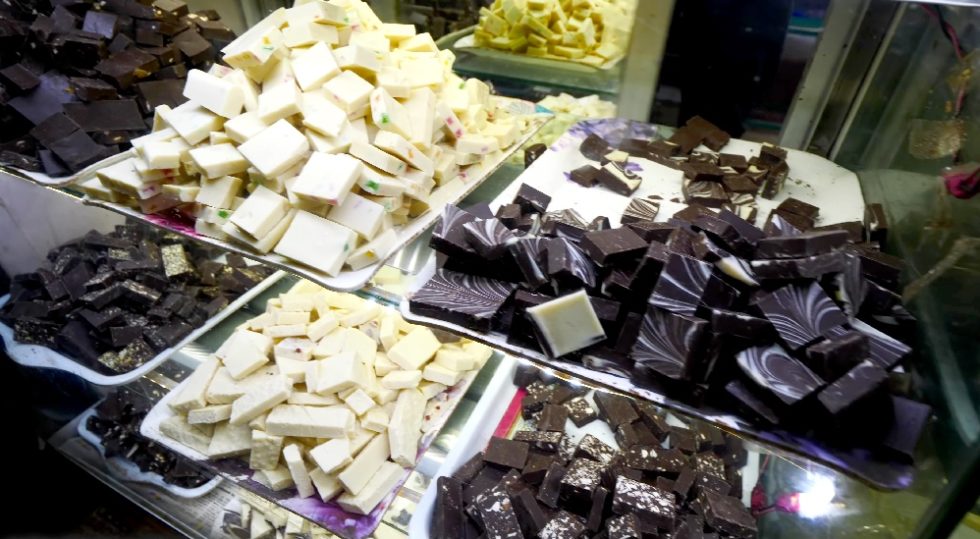 I was still a little hungry, so we left the street food market and decided to head back to the resort. It takes 45 minutes to go back because you’re going downhill. But before we left, I stopped at a shop to get another head scarf because mine was falling apart and really sweaty. I wanted a traditional white one. They didn’t have one, so we went to another shop. On the way, we passed more stalls selling pani puri, but by then everything was closing. 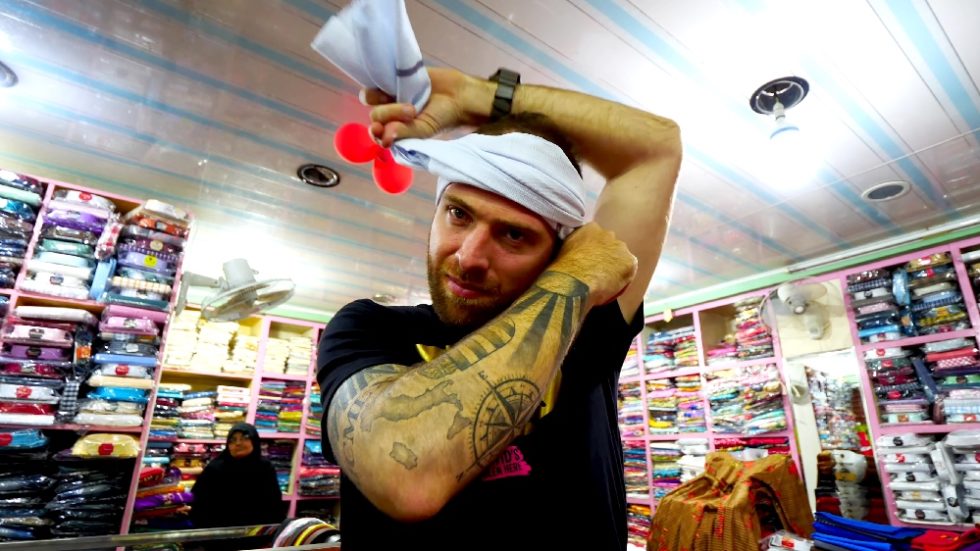 We headed back to the Dream Catcher Resort to have some barbecue and beef fry. The ride back was pitch dark. We stopped at another shop to get a head scarf. It was really nice. Then, we continued on to the resort. We walked across the hanging bridge and headed up to the sun deck past the pool.

On the sun deck, I met back up with my boy Ebbin. They had quail roasting over a fire as well as a huge bonfire. It was crowded by the fire and really hot, so we headed down to the pool to eat. We had some spicy and mild quail, chicken, mayonnaise, mint chutney, and salad. My friend Anita showed me how to eat it. 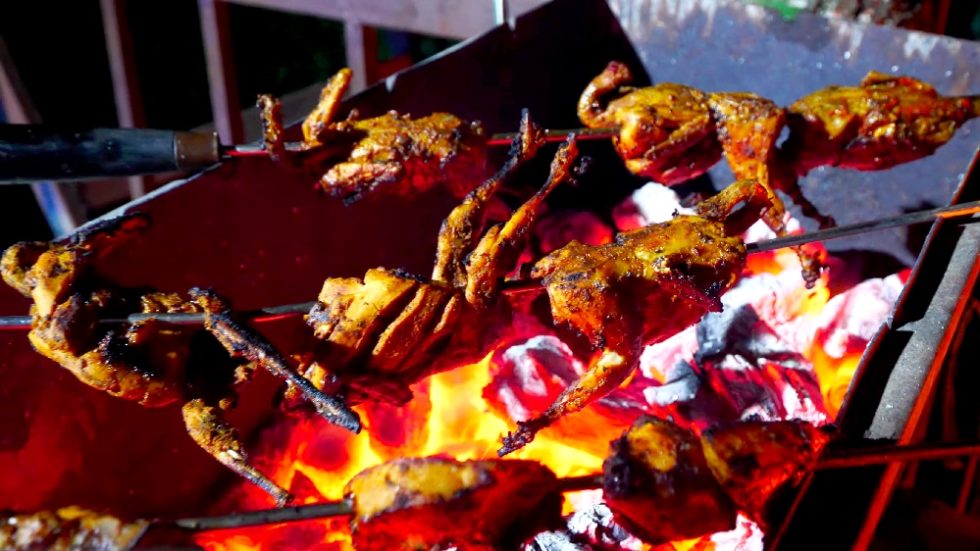 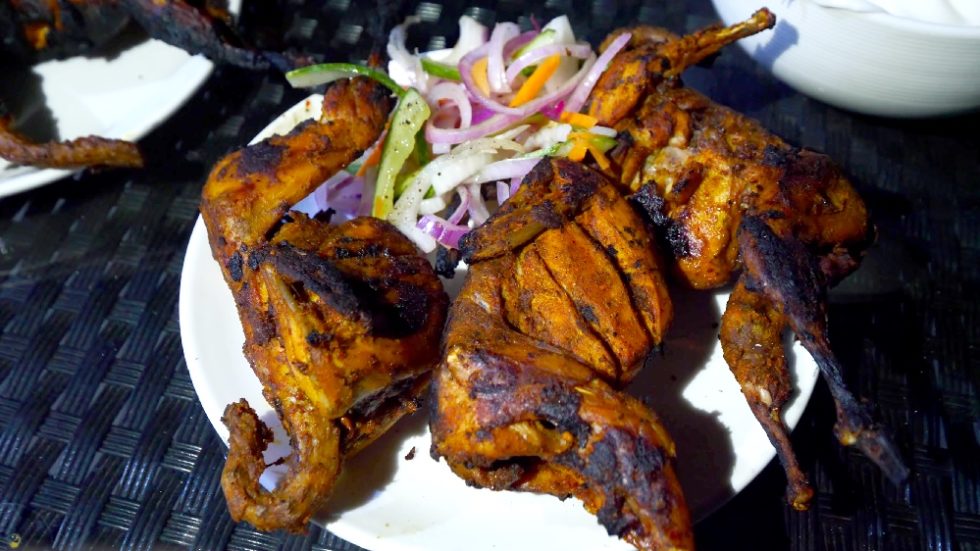 The quail doesn’t contain much meat, though. Then, I went for the chicken with the mint chutney. It contained a lot more flesh and was super juicy and crispy. I loved the smoky barbecue flavor. 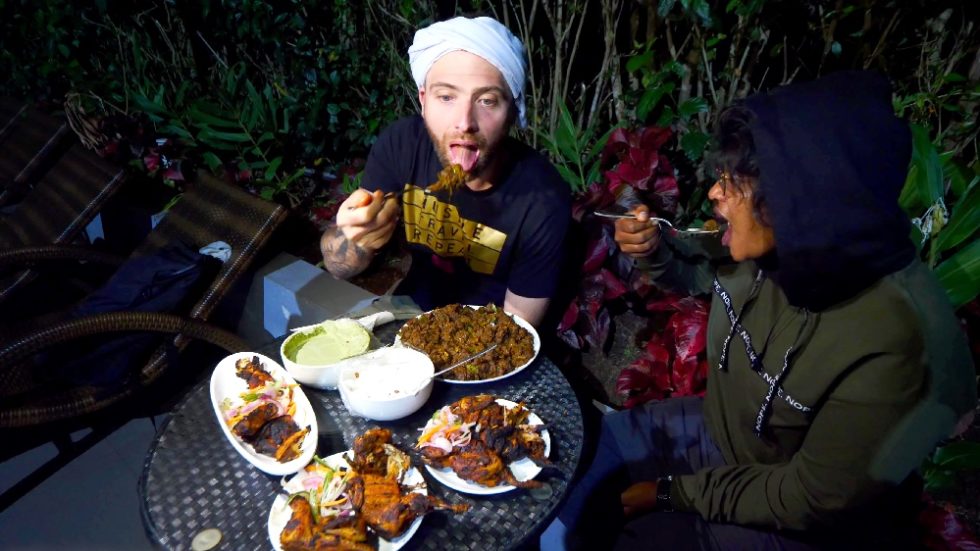 Then, the beef fry arrived! It looked so rich and contained curry leaves. It was chewy and tender and so unbelievable. It tasted like it had been slow-cooked and wasn’t too spicy. It contained a lot of black pepper, though! It was amazing! But it was 10 o’clock and I was super tired. What an outstanding way to end an amazing night of Indian street food in Munnar!

Huge thanks to my friends at the Dream Catcher Resort for driving me into Munnar. Be sure to check out their website! And as always, a big thanks to my boy Ebbin for making this dream trip a reality! Subscribe to his YouTube channel and check him out on Instagram! 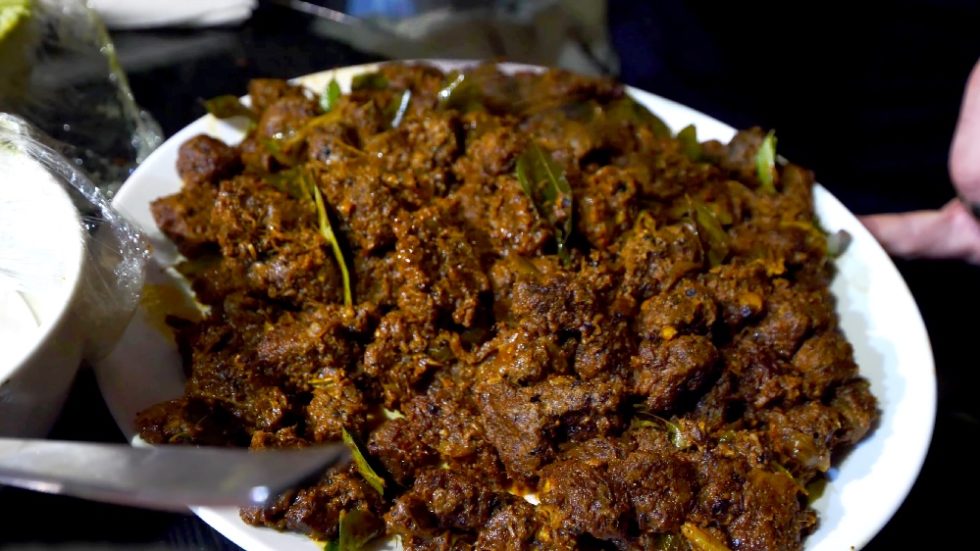 I hope you liked coming with me to try Indian street food in Munnar, Kerala, India! If you did, please give this video a thumbs up and leave a comment below. Also, please subscribe to my YouTube channel and click the notification bell so you don’t miss any of my travel/food adventures around the world!